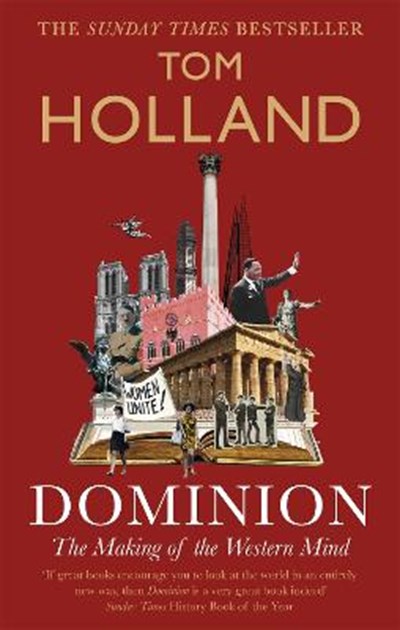 eBook FAQ
Add to Basket
Publisher: Little, Brown Book Group
ISBN: 9780349141206
Number of Pages: 624
Published: 06/08/2020
Width: 12.6 cm
Height: 20.2 cm
Description Author Information Reviews
'If great books encourage you to look at the world in an entirely new way, then Dominion is a very great book indeed . . . Written with terrific learning, enthusiasm and good humour, Holland's book is not just supremely provocative, but often very funny' Sunday Times History Book of the Year Christianity is the most enduring and influential legacy of the ancient world, and its emergence the single most transformative development in Western history. Even the increasing number in the West today who have abandoned the faith of their forebears, and dismiss all religion as pointless superstition, remain recognisably its heirs. Seen close-up, the division between a sceptic and a believer may seem unbridgeable. Widen the focus, though, and Christianity's enduring impact upon the West can be seen in the emergence of much that has traditionally been cast as its nemesis: in science, in secularism, and yes, even in atheism. That is why Dominion will place the story of how we came to be what we are, and how we think the way that we do, in the broadest historical context. Ranging in time from the Persian invasion of Greece in 480 BC to the on-going migration crisis in Europe today, and from Nebuchadnezzar to the Beatles, it will explore just what it was that made Christianity so revolutionary and disruptive; how completely it came to saturate the mind-set of Latin Christendom; and why, in a West that has become increasingly doubtful of religion's claims, so many of its instincts remain irredeemably Christian. The aim is twofold: to make the reader appreciate just how novel and uncanny were Christian teachings when they first appeared in the world; and to make ourselves, and all that we take for granted, appear similarly strange in consequence. We stand at the end-point of an extraordinary transformation in the understanding of what it is to be human: one that can only be fully appreciated by tracing the arc of its parabola over millennia.

Tom Holland is an award-winning historian, author and broadcaster. He is the author of Rubicon: The Triumph and the Tragedy of the Roman Republic, which won the Hessell-Tiltman Prize for History and was shortlisted for the Samuel Johnson Prize; Persian Fire, his history of the Graeco-Persian wars, won the Anglo-Hellenic League's Runciman Award in 2006; Millennium: The End of the World and the Forging of Christendom, a panoramic account of the two centuries on either side of the apocalyptic year 1000; In the Shadow of the Sword, which covers the collapse of Roman and Persian power in the Near East, and the emergence of Islam; and Dynasty, a portrait of Rome's first imperial dynasty. He has adapted Homer, Herodotus, Thucydides and Virgil for the BBC. His translation of Herodotus was published in 2013 by Penguin Classics and followed in 2016 by a history of AEthelstan published under the Penguin Monarchs series, and in 2019 AEthelflaed England's Forgotten Founder as a Ladybird Expert Book. In 2007, he was the winner of the Classical Association prize, awarded to 'the individual who has done most to promote the study of the language, literature and civilisation of Ancient Greece and Rome'. Holland is the presenter of BBC Radio 4's Making History. He has written and presented a number of TV documentaries for the BBC and Channel 4, on subjects ranging from religion to dinosaurs. He served two years as the Chair of the Society of Authors; as Chair of the PLR Advisory Committee and was on the committee of the Classical Association. @holland_tom