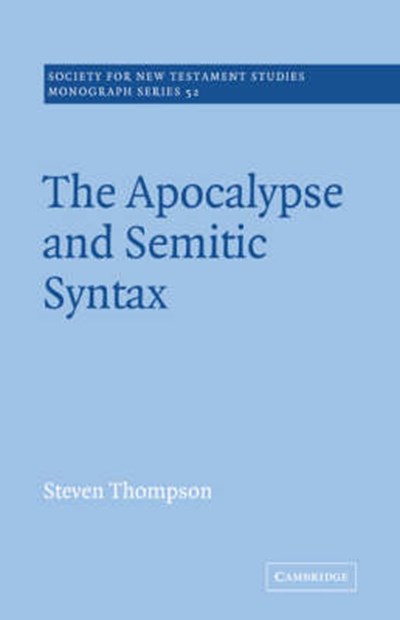 QTY
Add to Basket
Publisher: Cambridge University Press
ISBN: 9780521018784
Number of Pages: 168
Published: 22/08/2005
Width: 14 cm
Height: 21.7 cm
Description Author Information Reviews
This book offers a consistent explanation of the peculiarity of the language of the Apocalypse (or Book of Revelation), namely that the rules of Greek grammar are broken because of the influence of Hebrew and Aramaic. It advances previous similar hypotheses in three ways. First, it focuses chiefly on the verbal system. Secondly, by methodically citing the ancient Greek translations of the Old Testament to demonstrate Hebrew/Aramaic influence, it serves as a limited survey of the syntax of the Septuagint. Thirdly, it argues that the Apocalypse's grammar was influenced not by later Hebrew/Aramaic dialects in use during the first century AD but by Old Testament Hebrew/Aramaic. This thesis suggests a new approach to the Apocalypse that gives greater attention to the influence of Old Testament Hebrew/Aramaic grammar and a fuller awareness of the writer's indebtedness to the Old Testament.

Steven Thompson is a Senior Lecturer in Theology at Avondale College, New South Wales. His research interests include the special nature of the language of the ancient Greek apocalypses. He is also researching the social history of wine and drinking in the Graeco-Roman world. For further details, see Steven Thompson's entry in the Register of Australian Drug and Alcohol Research, database ID 843 (www.radar.org.au).