Sources for the Gospels of Matthew and Luke 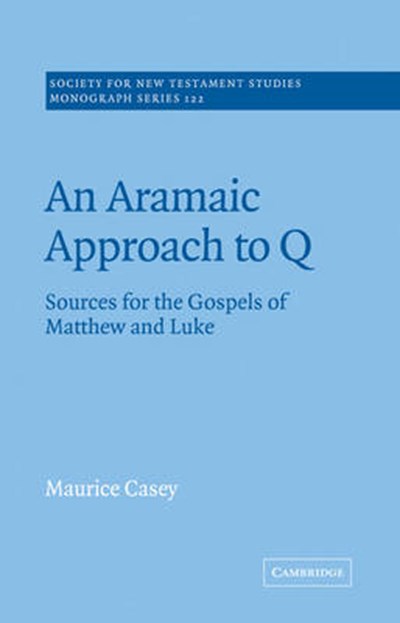 Sources for the Gospels of Matthew and Luke

QTY
Add to Basket
Publisher: Cambridge University Press
ISBN: 9780521018975
Number of Pages: 224
Published: 22/08/2005
Width: 14.6 cm
Height: 22.4 cm
Description Author Information Reviews
This is the first book to examine the Aramaic dimension of Q since the Aramaic Dead Sea scrolls made such work more feasible. Maurice Casey gives a detailed examination of key passages in Matthew and Luke's gospels, demonstrating that they used two different Greek translations of an Aramaic source, which can be reconstructed. He overturns the conventional model of Q as a single Greek document, and shows that Jesus said everything in the original Aramaic source. Further analysis of other gospel passages shows the evangelists editing a Greek translation of an Aramaic source. On one, it can be shown that Mark utilises a different Aramaic source. A complex model of Q is thus proposed. Casey argues that Aramaic sources behind part of Q are of extremely early date, and should contribute significantly to the quest for the historical Jesus.

Maurice Casey is Professor of New Testament Languages and Literature and Leverhulme Major Research Fellow at the University of Nottingham.

'... represent what is probably the most significant contribution in English to the study of the Aramaic background of the Jesus movement and the production of the Gospels since Matthew Black's An Aramaic Approach to the Gospels and Acts, first published in 1946.' Neotestamentica 'His challenge needs to be treated with the respect it deserves.' Churchman