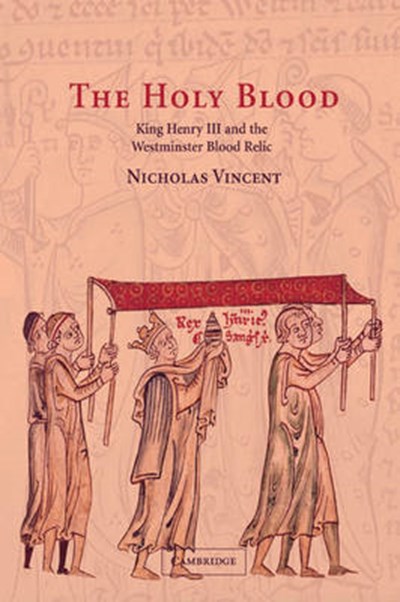 QTY
Add to Basket
Publisher: Cambridge University Press
ISBN: 9780521026604
Number of Pages: 272
Published: 01/06/2006
Width: 15 cm
Height: 22.6 cm
Description Author Information Reviews
The first extended study of relics of the Holy Blood: portions of the blood of Christ's passion preserved supposedly from the time of the Crucifixion and displayed as objects of wonder and veneration in the churches of medieval Europe. Inspired by the discovery of new evidence relating to the relic deposited by King Henry III at Westminster in 1247, the study proceeds from the particular political and spiritual motives that inspired this gift to a wider consideration of blood relics, their distribution across western Europe, their place in Christian devotion, and the controversies to which they gave rise among theologians. In the process the author advances a new thesis on the role of the sacred in Plantagenet court life as well as exploring various intriguing byways of medieval religion.

Nicholas Vincent is the author of five previous works on Anglo-French history, including Peter des Roches: An Alien in English Politics, 1205-1238 (1996) in the prestigious series 'Cambridge Studies in Medieval Life and Thought'. He is currently Professor of Medieval History at Christ Church College, Canterbury, and Visiting Fellow of Peterhouse, Cambridge. Professor Vincent is also Director (in succession to Professor Sir James Holt) of the British Academy's Angevin Acta project, and is soon to complete an edition of the charters of Henry II.

'... a fascinating exploration of the many faceted cult of Passion relics in the Middle Ages.' Church Times '... an exceptionally learned and wide-angled book.' English Historical Review '... a fascinating detective story ... a dazzling display of learning ... Vincent's book is a brilliant, penetrating, and important study of the history of the theology and sentiment of medieval eucharistic relics - and of some remarkable incidents in thirteenth-century political history besides.' Christopher N. L. Brooke '... extremely successful book.' Journal of Ecclesiastical History 'Nicholas Vincent presents an intellectual and geographical tour de force in this study of the sample of Christ's blood, presented to King Henry III by the patriarch of Jerusalem in 1247 ... Professor Vincent raises a number of important issues. He points to the significance which developments on the European mainland have for our understanding of medieval English history ... Professor Vincent presents a detailed analysis of the role played by sacral objects in medieval English politics and society, and thereby opens up a significant new area of research, an area, moreover, which so far has been largely ignored by historians of Britain during the High Middle Ages. In doing so, he successfully adopts and elaborates on a methodology, first pioneered by Marxist historians like Carlo Ginzburg. The end result is a complex, but immensely readable, exploration of politics, symbolism, religion and culture in England and Europe during the High Middle Ages and beyond.' Welsh History Review '... this book is a solid work of scholarship, which makes a real contribution to appreciations of late medieval devotion. ... This is a book of considerable interest, and impressive scholarship. Vincent has plundered a staggering range of material, reflected in detailed and extensive footnoting. At first the narrow title and somewhat esoteric focus might suggest that this is a book of limited appeal. Far from it: it certainly deserves to be read, and is highly readable. Interesting and enjoyable, it makes important contributions to understanding the Christocentric emphasis in the late medieval catholic devotion ... a valuable and stimulating statement.' Heythrop Journal