Paul and the Crucified Christ in Antioch

Maccabean Martyrdom and Galatians 1 and 2 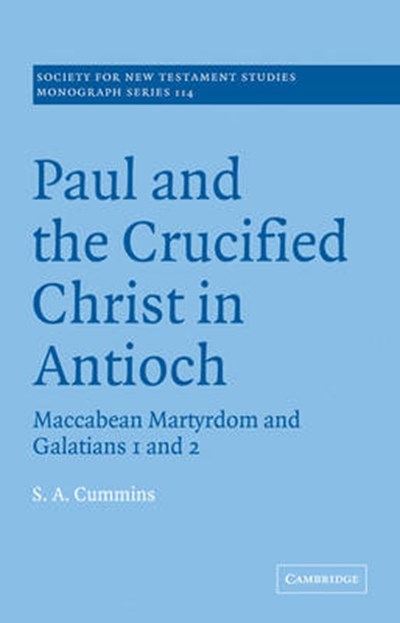 Paul and the Crucified Christ in Antioch

Maccabean Martyrdom and Galatians 1 and 2

QTY
Add to Basket
Publisher: Cambridge University Press
ISBN: 9780521037174
Number of Pages: 308
Published: 02/07/2007
Width: 13.9 cm
Height: 21.5 cm
Description Author Information Reviews
The so-called 'Antioch Incident' - the confrontation between the apostles Peter and Paul in Galatians 2.11-21 - continues to be a source of controversy in both scholarly and popular estimations of the emergence of the early Church and the development of Pauline theology. Paul and the Crucified Christ in Antioch offers an interesting interpretation of Paul's account of and response to this event, creatively combining historical reconstruction, detailed exegesis, and theological reflection. S. A. Cummins argues that the nature and significance of the central issue at stake in Antioch - whether the Torah or Jesus Christ determines who are the people of God - gains great clarity and force when viewed in relation to a Maccabean martyr model of Judaism as now christologically reconfigured and redeployed in the life and ministry of the apostle Paul.

S. A. Cummins is Associate Professor of New Testament at the Canadian Theological Seminary, Regina, Saskatchewan. He has taught both in Canada and the UK, and has published in academic journals.

'The exegetical skill and insight Cummins brings to important issues is considerable, and the implications of his conclusions are potentially far reaching ... a challenging work, and one which should stimulate considerable debate in scholarship.' Neotestamentica