How the Bible Became a Book

The Textualization of Ancient Israel 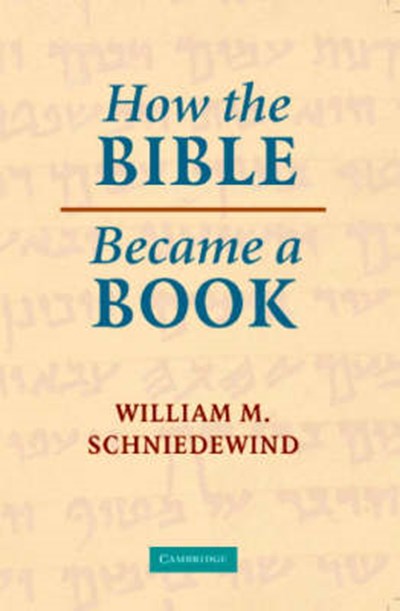 How the Bible Became a Book

The Textualization of Ancient Israel

QTY
Add to Basket
Publisher: Cambridge University Press
ISBN: 9780521536226
Published: 22/08/2005
Description Author Information Reviews
For the past two hundred years biblical scholars have increasingly assumed that the Hebrew Bible was largely written and edited in the Persian and Hellenistic periods. As a result, the written Bible has dwelled in an historical vacuum. Recent archaeological evidence and insights from linguistic anthropology, however, point to the earlier era of the late-Iron Age as the formative period for the writing of biblical literature. How the Bible Became a Book combines these recent archaeological discoveries in the Middle East with insights culled from the history of writing to address how the Bible first came to be written down and then became sacred Scripture. This book provides rich insight into why these texts came to have authority as Scripture and explores why Ancient Israel, an oral culture, began to write literature, challenging the assertion that widespread literacy first arose in Greece during the fifth century BCE.

Professor William M. Schniedewind chairs the Department of Near Eastern Languages and Cultures and is a Professor of Biblical Studies at UCLA. He has been a fellow at the Albright Institute of Archaeological Research in Jerusalem as well as a Visiting Scholar at the Hebrew University. He received his PhD in Near Eastern and Judaic Studies in 1992 at Brandeis University. He is most recently the author of Society and the Promise to David, published in 1999.

'For general readers interested in ancient history and religion, for Jews and Christians who study the Bible and its backgrounds, and for scholars who study the relationship between orality and literacy, this book will be both tremendously helpful and very enjoyable ... it has the potential to reshape the study of Hebrew Bible for years to come.' Benjamin D. Sommer, author of A Prophet Reads Scripture 'In this extremely well written book, William Schniedewind tackles what has emerged as the most important question in biblical studies of our time - the issue of when the ancient Israelite accounts and traditions were put in writing ... Sophisticated and broad in its scope and yet easy to follow, this book will certainly become a cornerstone in biblical studies and in the search for the historical Ancient Israel: a real intellectual delight.' Israel Finkelstein, co-author of The Bible Unearthed: Archaeology's New Vision of Ancient Israel and the Origin of Its Sacred Texts 'Schniedewind has produced a refreshing study, countering some of the extreme ideas of so-called 'minimalists' and offering a stimulus to further investigation of the uses of writing in biblical times.' Themelios '... open new avenues of research into the fascinating topic of how literature functioned in ancient society.' Journal for the Study of the Old Testament 'What is most commendable about this book is that it is not written in scholarly jargon, inaccessible to the general public. On the contrary, anyone reasonably familiar with the Bible ought to be able to follow it, although Schniedewind has in no way sacrificed the high standards of scholarship which he is known to maintain. This book is a must for all serious students of the Old Testament which it brings to life in an unusual setting and helps us to understand the true origins of Israel's written culture. ... Professor Schniedewind has pointed the way to what promises to become an exciting new phase in biblical studies.' Churchman 'This thesis is presented with much erudition ... At places the author's stance is refreshingly independent of the modern concensus ... It is an excellent venture into an important area and well deserving of careful study.' The Expository Times '... lucid and helpful ... His overall argument makes a significant contribution to current scholarly debates, even ... I have enjoyed reading the book, as it sparked off interesting thoughts.' Anvil