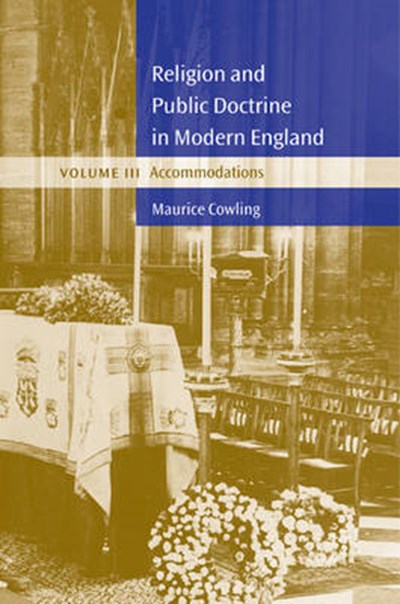 QTY
Add to Basket
Publisher: Cambridge University Press
ISBN: 9780521611893
Number of Pages: 792
Published: 11/11/2004
Width: 15.6 cm
Height: 23.5 cm
Description Author Information Reviews
The third and concluding volume of Maurice Cowling's magisterial sequence examines three related strands of English thought - latitudinarianism, the Christian thought which has assumed that latitudinarianism gives away too much, and the post-Christian thought which has assumed that Christianity is irrelevant or anachronistic. As in previous volumes, Maurice Cowling conducts his argument through a series of encounters with individual thinkers, including Burke, Disraeli, the Arnolds, Tennyson and Tawney in the first half, and Darwin, Keynes, Orwell, Leavis and Berlin in the second. Central to the whole is Mr Cowling's contention that the modern mind cannot escape from religion. Religion and Public Doctrine in Modern England represents a massive contribution to the intellectual and cultural history of modern England, of interest to historians, literary and cultural critics, theologians, philosophers, economists, as well as to that broader reading public with a serious interest in the making of the English mental landscape.

Maurice Cowling was born in London in 1926. He was educated at Battersea Grammar School and Jesus College, Cambridge, where he read History. He did military service between 1944 and 1948 in the British and Indian armies. He as a Fellow of Jesus College from 1950 to 1953 and, after a period spent chiefly in London, returned to Jesus as a Fellow in 1961. Since 1963 he has been a Fellow of Peterhouse, Cambridge, and from 1976-93 University Reader in Modern English History.

' ... this concluding offering is of such sophistication and subtlety of thought ...'. Professor Edward Norman, Church Times ' ... this will be recognised as a very important book.' Professor Edward Norman, Church Times 'This book, like the two volumes that preceded it, is a masterpiece of invective and erudition. No one can pretend to understand the intellectual background to our times without reading it.' Country Life 'Reading it provides a very remarkable experience.' Catholic Herald 'Religion and Public Doctrine in Modern England is a remarkable book, quite sui generis...This dense yet witty work is worth whole shelves of the cultural studies that are coming to supersede the real work of history.' Government and Opposition 'It is a magnificent achievement and Catholic schools will want this volume in the school library even if they do nto have the previous two.' Mentor Magazine '... the trilogy will be compulsory, and perhaps even compulsive, reading for anyone interested in the place occupied by Christianity as a 'public doctrine' in England over the last century and a half.' Journal of Ecclesiastical History