From Italian Prince to Universal Pastor 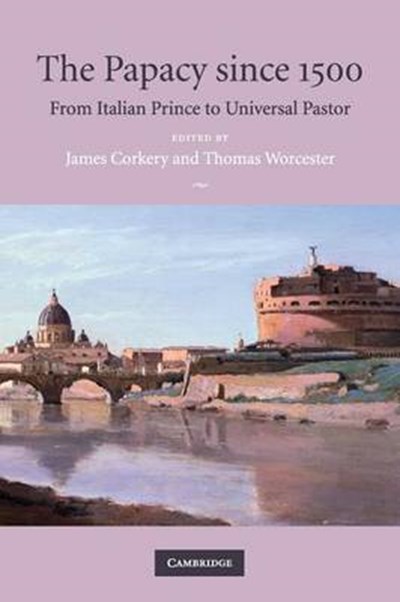 From Italian Prince to Universal Pastor

QTY
Add to Basket
Publisher: Cambridge University Press
ISBN: 9780521729772
Published: 12/08/2010
Description Author Information Reviews
These original essays offer thought-provoking perspectives on the complex evolution of the papacy in the last 500 years, from the Pope as an Italian Renaissance prince to the Pope as a universal pastor concerned with the well-being and salvation of human beings everywhere on earth. Structured by detailed studies of some of the most significant Popes in this evolution, this volume explores how papal policies and actions were received as the Popes sought to respond to the political, cultural, and social circumstances of their time. Included are essays examining pontificates from that of Julius II, warrior as well as patron of the arts, to the era of the French Revolution and Napoleon, to Paul VI's pleas for peace during the Cold War, and to John Paul II's itinerant, prophetic, and hierarchical model of a pastoral papacy in the age of television and the internet.

James Corkery is Associate Professor of Systematic Theology, Milltown Institute of Theology and Philosophy, Dublin. He is the author of Joseph Ratzinger's Theological Ideas (2009). Thomas Worcester is Associate Professor of History, College of the Holy Cross, Massachusetts. He is the author of The Cambridge Companion to the Jesuits (Cambridge, 2008) and the co-editor (with Gauvin Bailey, Pamela Jones and Franco Mormando) of Hope and Healing: Painting in Italy in a Time of Plague, 1500-1800 (2005).

'This is an erudite and scholarly book, but invaluable in understanding the development of the papacy to what we know today. An interesting and worthwhile read as an historical document even for those who do not adhere to the Catholic faith.' Methodist Recorder '... the editors argue convincingly that an evolving context of Italian, European, global, and media history has most influenced the changes demonstrable in the development of the popes' roles since 1500.' A. D. Wright, University of Leeds 'As Corkery and Worcester explain ... the book's genesis came about as both were teaching undergraduate courses on the papacy ... The common thread for theologian and historian was the papacy's historical development, especially respecting prevalent contemporary social conditions. From these courses came the collaboration on this provoking and informative volume.' Carl Franks, Central Methodist University 'The collection gives a perspective that a simple chronology of the papacy could not have yielded ... the book's strong contribution is that it presents the papacy's complex interrelationships of persons, policies, practices, and presuppositions, as well as their development and the questions they raise. One will profit much from knowing about such questions through the interpretive lens of prince, patron, and pastor with which the contributors examine the popes since 1500.' John W. Padberg, S.J., Institute of Jesuit Sources, St Louis