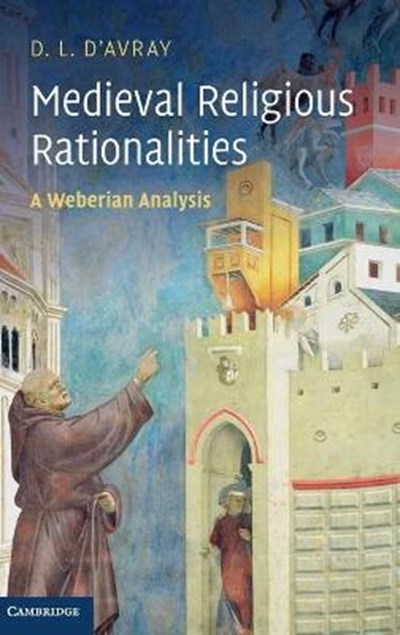 eBook FAQ
Add to Basket
Publisher: Cambridge University Press
ISBN: 9780521767071
Number of Pages: 208
Published: 23/09/2010
Width: 15.6 cm
Height: 23.6 cm
Description Author Information Reviews
Inspired by the social theories of Max Weber, David d'Avray asks in what senses medieval religion was rational and, in doing so, proposes a new approach to the study of the medieval past. Applying ideas developed in his companion volume on Rationalities in History, he explores how values, instrumental calculation, legal formality and substantive rationality interact and the ways in which medieval beliefs were strengthened by their mutual connections, by experience, and by mental images. He sheds new light on key themes and figures in medieval religion ranging from conversion, miracles and the ideas of Bernard of Clairvaux to Trinitarianism, papal government and Francis of Assisi's charismatic authority. This book shows how values and instrumental calculation affect each other in practice and demonstrates the ways in which the application of social theory can be used to generate fresh empirical research as well as new interpretative insights.

D. L. d'Avray is Professor of Medieval History at University College London. A fellow of the British Academy since 2005, d'Avray has published widely on his research interests in medieval history.

'Medieval Religious Rationalities is a rich book, yet one that is not easy to sum up ... [it] displays an impressive range of sources and covers an equally impressive array of issues relating to the history of medieval Christianity ... [it] not only ventures into unchartered territory; it challenges some of the most powerful interpretations of the dynamics of medieval Christianity ... [it] has the immense merit of demonstrating that religion can under certain conditions make an essential contribution to the intercultural dialogue - a precious reminder in a very timely book, indeed.' Martial Staub, Journal of Religion 'Medieval Religious Rationalities is a challenging but rewarding book. David d'Avray sets himself the task of applying to medieval religion Max Weber's categories for the analysis of reason ... Throughout the book d'Avray's style is engaging, and he takes pains to explain technicalities for the benefit of non-medievalists.' Norman Housley, Journal of Ecclesiastical History 'D. L. d'Avray excels at inquiring into networks of conviction ... [he] has special expertise in the study of preaching, scholastic [thought], the papacy, and marriage in the late Middle Ages, and many of his very well-chosen illustrations reflect this ... a rich mine of information about medieval mentalities and procedures.' David Luscombe, American Historical Review 'Unlike those historians who prefer to remain the prisoner of theories which are held unconsciously, David d'Avray's aim ... is to engage explicitly with the 'ideal types' of rationality catalogued in Max Weber's work in order to show their empirical value in the study of the religion of the medieval West ... constitute[s] a model of how historians can engage with social theory ... clearly and wittily written and resort[s] to technical jargon in order to clarify the argument rather than to obscure it ... logically structured and address[es] issues which are of interest not just to medievalists but also to historians of other periods, as well as to philosophers, anthropologists, sociologists and social theorists ... draw[s] effortlessly on an impressive range of empirical examples and [is] the product of wide reading in philosophy and social science.' S. H. Rigby, English Historical Review