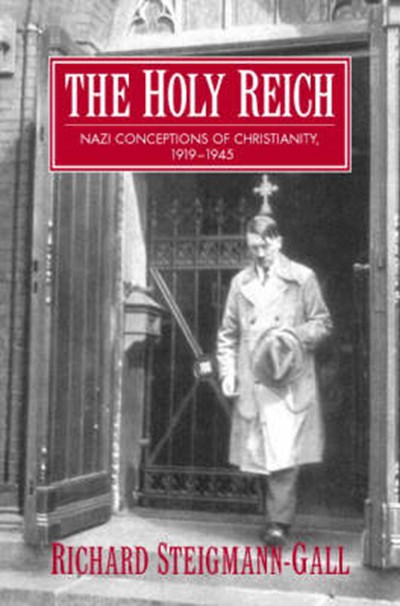 eBook FAQ
Add to Basket
Publisher: Cambridge University Press
ISBN: 9780521823715
Number of Pages: 312
Published: 21/04/2003
Width: 15.2 cm
Height: 22.9 cm
Description Author Information Reviews
Analyzing the previously unexplored religious views of the Nazi elite, Richard Steigmann-Gall argues against the consensus that Nazism as a whole was either unrelated to Christianity or actively opposed to it. He demonstrates that many participants in the Nazi movement believed that the contours of their ideology were based on a Christian understanding of Germany's ills and their cure. A program usually regarded as secular in inspiration - the creation of a racialist 'people's community' embracing antisemitism, antiliberalism and anti-Marxism - was, for these Nazis, conceived in explicitly Christian terms. His examination centers on the concept of 'positive Christianity,' a religion espoused by many members of the party leadership. He also explores the struggle the 'positive Christians' waged with the party's paganists - those who rejected Christianity in toto as foreign and corrupting - and demonstrates that this was not just a conflict over religion, but over the very meaning of Nazi ideology itself.

Richard Steigmann-Gall is Assistant Professor of History at Kent State University. He has earned fellowships and awards from institutions in Germany, Israel, and Canada, and he has published articles in Central European History, German History, Social History, and Kirchliche Zeitgeschichte.

'The Holy Reich is both deeply researched and thoughtfully argued. It is the first comparative analysis of the religious beliefs of leading Nazis and a timely reminder of the intimate relations between liberal Protestantism and National Socialism. This is an important and original book by a talented young scholar that deserves as wide a readership as possible.' Michael Burleigh, Washington & Lee University and author of The Third Reich: A New History 'The Holy Reich is a brilliant and provocative work that will recast the whole debate on Christianity and Nazism. We have come to realize that Christianity embraced Nazism more than we used to believe. Now, in a work of deep revisionist import, Richard Steigmann-Gall shows us that the embrace was more than reciprocated.' Helmut Walser Smith, author of The Butcher's Tale: Murder and Anti-Semitism in a German Town 'There has been a huge amount of research on the attitude of the Christian Churches to the Nazis and their policies, but astonishingly until now there has been no thorough study of the Nazis' own religious beliefs. Richard Steigmann-Gall has now provided it. He has trawled through a lot of very turgid literature to show that active Nazis from the leadership down to the lower levels of the party were bitterly opposed to the Catholic Church, but had a much more ambivalent attitude to Protestantism and to Christianity in a wider sense ... Far from being uniformly anti-Christian, Nazism contained a wide variety of religious beliefs, and Steigmann-Gall has performed a valuable service in providing a meticulously documented account of them in all their bizarre variety.' Richard J. Evans, University of Cambridge 'In the crowded field of Third Reich history, The Holy Reich really does have something original to say ... an uncomfortably thought-provoking work of admirable scholarship.' The Times Higher Education Supplement '... connects Nazism to liberal Protestantism in a convincing way.' The Sunday Times '... excellently documented and deeply disturbing ...' Church Times '... an incisive study ... this book is an admirable attempt to rethink the ethical and theological nature of Nazi ideology and practice. Steigmann-Gall is not trying to discard past perspectives or to act as a revisionist, but rather to deepen our current understanding of the relationship between Nazi ideology and Christian thought. In the process, he exposes lucidly the very contested nature of the meaning of Christianity as it emerged during the Nazi debates and the entire period of the third Reich.' European History Quarterly ' This is an important and well-researched study ... a very thought provoking, controversial and important book which deserves a wide readership because it radically challenges some widely-held assumptions about Nazism"s pagan and/or anti-Christian core.' German History '... fascinating and detailed ...'. German Politics 'His archive work is impressive and the text's story is pieced together with both thought and art. Its sweep takes in everything one would expect and displays well the competing tendencies within Hitler's movement ... More unusually it also discusses possible connections between Christianity and Nazi social policy ...'. Reviews in History 'This rigorously researched and deeply disturbing book questions the scholarly consensus that Nazism was either unrelated to Christianity or actively opposed to it.' The Times (Weekend Review) '... this book is one that will be easily included on anyone's bibliography of the Nazi regime. It is a book to be mulled over and considered deeply.' Open History 'This is a meticulous, even exhaustive book, offering a dense exploration of a great field of material. ... a truly important book which will lead many scholars to refashion or sharpen their perspectives, and even to think again.' English Historical Review