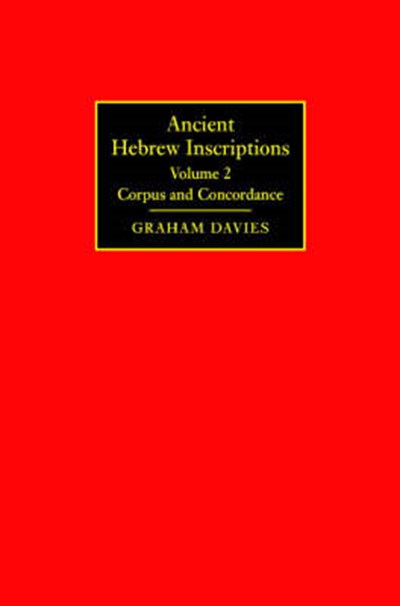 QTY
Add to Basket
Publisher: Cambridge University Press
ISBN: 9780521829991
Number of Pages: 290
Published: 29/01/2004
Width: 2.2 cm
Height: 23.6 cm
Description Author Information Reviews
This is the sequel to the first volume of Ancient Hebrew Inscriptions: Corpus and Concordance, published in 1991. It contains some 750 inscriptions from the Old Testament period which were mainly published for the first time between 1990 and 2000. Some were discovered in regular archaeological excavations, others come from private collections. The new material includes ostraca from different sites, which are of religious, literary and historical importance, and extensive information about the personal names which were in use in the biblical period. The number of coin-legends and other texts from the Persian and early Hellenistic periods has also been enlarged. Each text is supplied with a brief description, an approximate date and publication information. The concordance provides an easy way to discover which Hebrew words and proper names occur in non-biblical sources and helps greatly to widen the basis for Hebrew language study.

Graham Davies is Professor of Old Testament Studies at the University of Cambridge and Fellow of Fitzwilliam College. He is the author of Hosea (Old Testament Guide: 1993), Hosea (New Century Bible: 1992), Ancient Hebrew Inscriptions: Corpus and Concordance Vol. 1 (1991), Megiddo (1986), and The Way of the Wilderness (1979).

'Davies is to be warmly congratulated on this work of primary scholarship, which has made full use of the computer revolution, but as an aid to and not a substitute for the painstaking probing which our forefathers have taught us dare not be abandoned.' Society for Old Testament Study '... now all who have a little Hebrew should be able not only to find a text quickly and check whether the words and names it contains are common or rare but, perhaps most importantly, they will have at their disposal a wider context within which to appraise the wilder and more enthusiastic claims to which from time to time epigraphy ... is prone. All libraries at all catering for theological study should acquire this ... beautifully produced and potentially very valuable work of reference.' The Expository Times