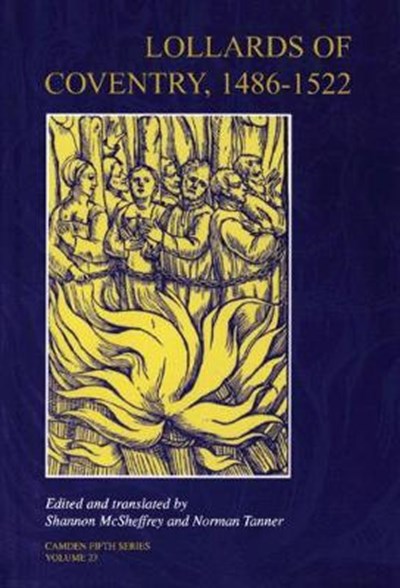 QTY
Add to Basket
Publisher: Cambridge University Press
ISBN: 9780521830836
Number of Pages: 372
Published: 06/11/2003
Width: 14.8 cm
Height: 22.4 cm
Description Author Information Reviews
In the late fifteenth and early sixteenth centuries, Coventry harboured a community of Lollards, adherents of medieval England's only popular heresy. Allowed to flourish relatively unmolested for decades, the Coventry Lollards came under close episcopal scrutiny in 1511 and 1512 when Geoffrey Blyth, bishop of Coventry and Lichfield, began a concerted effort to uncover and eradicate their community. This volume presents a remarkable record of the testimony compiled during Blyth's crackdown, along with all other surviving evidence for heretical activities in Coventry. The documents, offered here both in their original languages of Latin and Middle English and in modern English translation, give new insights into the nature of religious dissent in the years just prior to the first stirrings of the English Reformation.

Since 1992, Shannon McSheffrey has taught in the History Department at Concordia University in Montreal. She has written Gender and Heresy: Women and Men in Lollard Communities, 1420-1530 (Philadelphia: University of Pennsylvania Press, 1995), Love and Marriage in Late Medieval London (Kalamazoo: Medieval Institute Press, 1995).

'... the editors give us a valuable introduction to and a fairly comprehensive view of the nature of later Lollardy in the provinces ... a rich collection of materials ... The translation [] is unprecedented, I believe, for volumes in the Royal History Society's Camden Series, and it increases the classroom utility of the volume many fold ... it is hard to think of another single volume of primary materials that brings home, quite this clearly and concisely, the nature of the prosecution ...'. H-Net Book Review 'The editors deserve thanks for making these records available in a user-friendly format and in fluid English translation. ... a volume that will be treasured by students of later Lollardy.' Journal of Ecclesiastical History