Legend of the Septuagint

From Classical Antiquity to Today 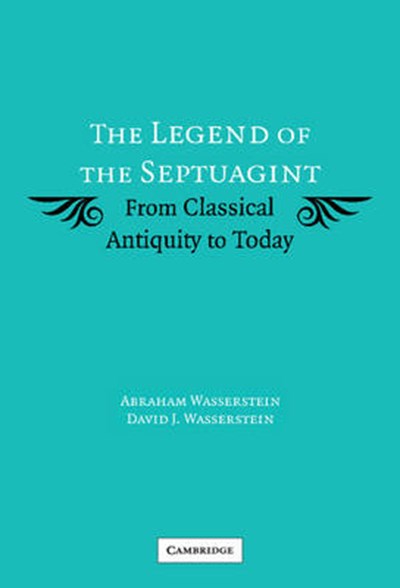 Legend of the Septuagint

From Classical Antiquity to Today

QTY
Add to Basket
Publisher: Cambridge University Press
ISBN: 9780521854955
Number of Pages: 354
Published: 03/04/2006
Width: 15.2 cm
Height: 22.9 cm
Description Author Information Reviews
The Septuagint is the most influential of the Greek versions of the Torah, the first five books of the Hebrew Bible. The exact circumstances of its creation are uncertain, but different versions of a legend about the miraculous nature of the translation have existed since antiquity. Beginning in the Letter of Aristeas, the legend describes how Ptolemy Philadelphus commissioned seventy-two Jewish scribes to translate the sacred Hebrew scriptures for his famous library in Alexandria. Subsequent variations on the story recount how the scribes, working independently, produced word-for-word, identical Greek versions. In the course of the following centuries, to our own time, the story has been adapted and changed by Jews, Christians, Muslims and pagans for many different reasons: to tell a story, to explain historical events and to lend authority to the Greek text for the institutions that used it. This book offers the first account of all of these versions over the last two millennia, providing a history of the uses and abuses of the legend in various cultures around the Mediterranean.

Abraham Wasserstein (born Frankfurt am Main, 1921, died Jerusalem, 1995) taught at the universities of Glasgow and Leicester before taking up a chair in Greek at the Hebrew University of Jerusalem, in 1969, where he stayed until his death in 1995. He had special interests in Greek literature and science, and wrote widely in these fields. His publications include an edition of the medieval Hebrew translation of Galen's commentary on Hippocrates' Airs, Waters and Places (lost in the original Greek). The present book was begun by him and left incomplete at his death. David J. Wasserstein, AW's son, read classics and oriental studies at Oxford (D.Phil. 1982). He lectured in Arabic and Hebrew at University College, Dublin, and was professor of Islamic history at Tel Aviv University, before taking up a chair of History and of Jewish Studies at Vanderbilt University, in Nashville, Tennessee, in 2004. He is the author of The Rise and Fall of the Party-Kings (1985) and The Caliphate in the West (1993), as well as of many articles on medieval Islamic and Jewish topics.

"In assembling and analyzing the transmutations of the colorful Septuagint legend from Aristeas through the present day, this work is a major contribution to scholarship ... Anyone with an interest in the legend or the issues it raises about translation, literary transmission and Jewish identity will be thrilled to find this material, in all its linguistic and cultural diversity, collected in a single book." -Naomi S. Seidman, author of A Marriage Made in Heaven: The Sexual Politics of Hebrew and Yiddish (1997) -- "Completing a work begun by his father, David Wasserstein has made a significant contribution to the study of the reception history of the Septuagint. This important volume deserves a place in every academic library." -Karen H. Jobes, Wheaton College, Journal of the Evangelical Theological Society "This book, whose authors demonstrate an extraordinary range of interests and linguistic skills, will surely be the definitive resource for anyone interested in the historical and bibliographic material relating to the story of the creation of the Septuagint, and various religious and secular uses to which it had been put ... of inestimable scholarly value." -Journal of the American Academy of Religion "...readers of W.'s book will find here both good historical scholarship and a fascinating story well told." -Theological Studies