Jews and Heretics in Catholic Poland

A Beleaguered Church in the Post-Reformation Era 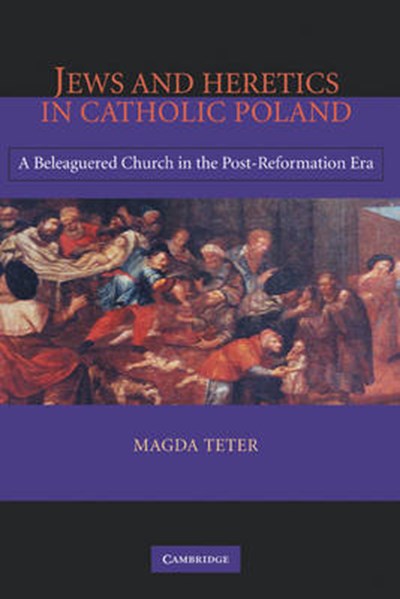 Jews and Heretics in Catholic Poland

A Beleaguered Church in the Post-Reformation Era

QTY
Add to Basket
Publisher: Cambridge University Press
ISBN: 9780521856737
Number of Pages: 312
Published: 26/12/2005
Width: 15.2 cm
Height: 22.9 cm
Description Author Information Reviews
Jews and Heretics in Catholic Poland takes issue with historians' common contention that the Catholic Church triumphed in Counter-reformation Poland. In fact, the Church's own sources show that the story is far more complex. From the rise of the Reformation and the rapid dissemination of these new ideas through printing, the Catholic Church was overcome with a strong sense of insecurity. The 'infidel Jews, enemies of Christianity' became symbols of the Church's weakness and, simultaneously, instruments of its defence against all of its other adversaries. This process helped form a Polish identity that led, in the case of Jews, to racial anti-Semitism and to the exclusion of Jews from the category of Poles. This book portrays Jews not only as victims of Church persecution but as active participants in Polish society who as allies of the nobles, placed in positions of power, had more influence than has been recognised.

Magda Teter is Assistant Professor of History at Wesleyan University. She is the recipient of the Koret Foundation publication prize and has been published in English, Polish and Hebrew in such journals as Jewish History, AJS Review and Gal-Ed.

'This book will be of interest to scholars concerned with early modern European history, Church history, Polish history, Jewish history, and cultural studies. Its novel thesis about the Church and its marshalling of so many valuable primary sources will make it a necessary acquisition even for those who only touch the fields it covers in a secondary way.' Moshe Rosman, Bar Ilan University 'Exhaustively researched ... This fascinating book provides detailed evidence of a fearful, anxious and embattled Church usually content to live alongside Jews as long as other threats to its hegemony did not pose serious challenges. Magda Teter helps us to understand that ... the so-called 'Triumph of the Counter Reformation' was not only to a considerable extent illusory, but the fearfulness of the Church continually demonstrated that it was indeed so.' Tony Cross, The New Blackfriars 'Jews and Heretics is an original book, based on wide-ranging research in Polish libraries and archives. Teter has a persuasive thesis that will be of interest to all historians of early modern Europe.' Church History 'This volume not only fills a gaping hole in the historical literature on Polish Catholicism and Polish-Jewish relations, but it does so with admirable professionalism. Jews and Heretics in Catholic Poland will remain the standard work on Catholic Judeophobia in early-modern Poland for years to come ... Should be read not only by specialists in early-modern religious history, but by anyone interested in the history of antisemitism, Jewish- Catholic relations, or Polish history more generally.' Journal of the American Academy of Religion 'The strengths of this book are numerous. ... This is a much more nuanced look at the actual situation in post-Reformation Poland than found in previous studies.' Sixteenth Century Journal