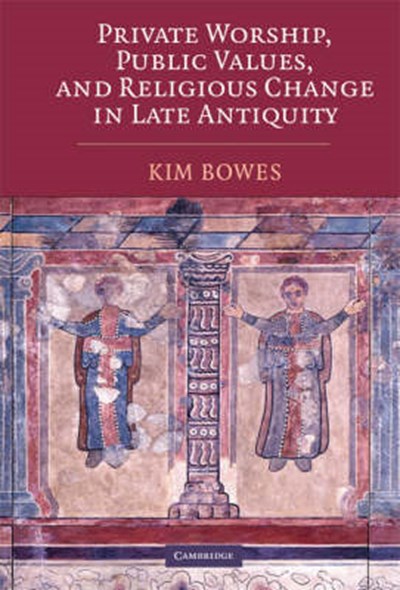 QTY
Add to Basket
Publisher: Cambridge University Press
ISBN: 9780521885935
Number of Pages: 376
Published: 28/07/2008
Width: 18.7 cm
Height: 26 cm
Description Author Information Reviews
Conventional histories of late antique Christianity tell the story of a public institution - the Christian Church. In this book, Kim Bowes relates another history, that of the Christian private. Using textual and archaeological evidence, she examines the Christian rituals of home and rural estate, which took place outside the supervision of bishops and their agents. These domestic rituals and the spaces in which they were performed were rooted in age-old religious habits. They formed a major, heretofore unrecognised force in late ancient Christian practice. The religion of home and family, however, was not easily reconciled with that of the bishop's Church. Domestic Christian practices presented challenges to episcopal authority and posed thorny questions about the relationship between individuals and the Christian collective. As Bowes suggests, the story of private Christianity reveals a watershed in changing conceptions of 'public' and 'private', one whose repercussions echo through contemporary political and religious debate.

Kim Bowes is an associate professor of classics at the University of Pennsylvania and has also taught at Cornell University. She has published on subjects ranging from Christian archaeology and domestic architecture to settlement dynamics and the late Roman economy, and she has excavated Roman and late Roman sites around the Mediterranean.

"Kim Bowes's book, Private Worship, Public Values, and Religious Change in Late Antiquity, manages to be both original and relevant...This book is commendable not only for adding great complexity to our view of late antique Christianity, but especially for the type of scholarship it represents. ...Private Worship will be of interest to a wide audience. ...This is not just a book about the religious history of the later Roman Empire, but a good example of total history in the style of Marc Bloch and Georges Duby. Scholars have recently criticized late antique scholarship for neglecting the crucial, 'hard' questions of social relations and historical change that marked this period. B's work is a fine example of how these wider questions can be re-addressed, without neglecting the important contributions of cultural and religious historians. --BMCR "This book is both important and exciting. Bowes deploys a wealth of evidence, both textual and material, in order to examine the scope that was available to late antique individuals for religious activity beyond the reach of institutionalized authority structures, and discovers that this was very much greater than conventional accounts have allowed." --Early Medieval Europe