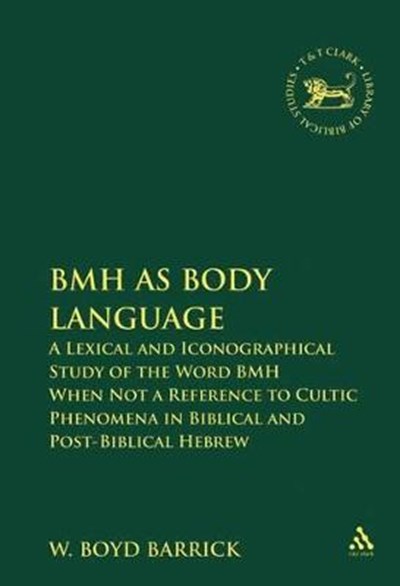 QTY
Add to Basket
Publisher: Bloomsbury Publishing PLC
ISBN: 9780567026583
Number of Pages: 208
Published: 01/08/2008
Width: 15.6 cm
Height: 23.4 cm
Description Author Information Reviews
It is customarily assumed that the Hebrew word BMH denotes a high place, first a topographical elevation and derivatively a cult place elevated either by location or construction.This book offers a fresh, systematic, and comprehensive examination of the word in those biblical and post-biblical passages where it supposedly carries its primary topographical sense.Although the word is used in this way in only a handful of its attestations, they are sufficiently numerous and contextually diverse to yield sound systematic, rather than ad hoc, conclusions as to its semantic content.Special attention is paid to its likely Semitic and unlikely Greek cognates, pertinent literary, compositional, and text-critical matters, and the ideological and iconographical ambiance of each occurrence.This study concludes that the non-cultic word BMH is actually *bomet, carrying primarily (if not always) an anatomical sense approximate to English back, sometimes expanded to the body itself.The phrase bmty-rs (Amos 4:13, Micah 1:3, and CAT 1.4 VII 34; also Deut. 32:13a, Isa. 58:14ab-ba, and Sir. 46:9b) derives from the international mythic imagery of the Storm-God:it refers originally to the mythological mountains, conceptualized anthropomorphically, which the god surmounts in theophany, symbolically expressing his cosmic victory and sovereignty.There is no instance where this word (even 2 Sam. 1:19a and 1:25b) is unequivocally a topographical reference. The implications of these findings for identifying the bamah-sanctuary are briefly considered.

W. Boyd Barrick is the former dean and part-time instructor of religion at Montana State Univsersity-Billings, USA. He is the author of The King and the Cemeteries: Toward a New Understanding of Josiah' Reform.