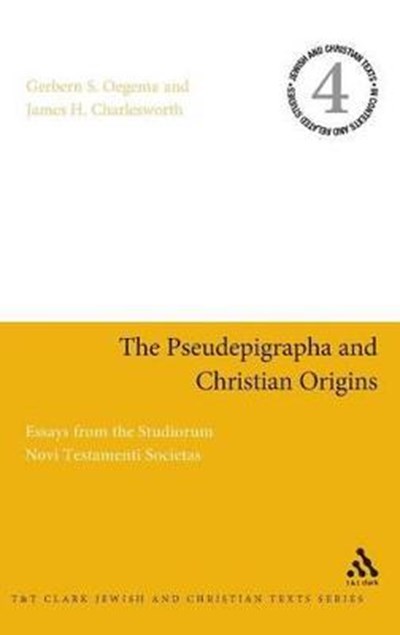 QTY
Add to Basket
Publisher: Bloomsbury Publishing PLC
ISBN: 9780567027191
Number of Pages: 312
Published: 01/01/2009
Description Author Information Reviews
In the Seminar "The Pseudepigrapha and Christian Origins of the Studiorum Novi Testamenti Societas," chaired from 2000 to 2006 by Professors James H. Charlesworth (Princeton) and Gerbern S. Oegema (McGill), the relation between the Pseudepigrapha and the New Testament has been discussed systematically and intensively in a way never seen before. The seminar and its participants have focused on the use, adaptation, reinterpretation and further development of non-canonical traditions in the canonical writings of Early Christianity.The Pseudepigrapha investigated included the Old Testament ones and those found in the Qumran as well as the Pseudepigrapha of the New Testament and the ones used in the Early Church. The seminar and its participants, who were all internally renowned experts from around the world, have focused on the use, adaptation, reinterpretation and further development of non-canonical traditions (except for Philo, Josephus, the Essene and early Rabbinic writings) in the canonical writings of Early Christianity. The seminar has met in total five times in various locations, while systematically being arranged around the following topics: The Pseudepigrapha and the Synoptic Gospels, the "Gospel of John", the "Epistles of Paul", the Other New Testament Writings, and the "Revelation of John".This series focuses on early Jewish and Christian texts and their formative contexts also includes sourcebooks that help clarify the ancient world. Five aspects distinguish this series. First, the series reflects the need to situate, and to seek to understand, these ancient texts within their originating social and historical contexts. Second, the series assumes that it is now often difficult to distinguish between Jewish and Christian documents, since all early 'Christians' were Jews. Jesus and his earliest followers were devout Jews who shared many ideas with the well-known Jewish groups, especially the Pharisees, the Essenes, and the various apocalyptic groups.Third, the series recognizes that there were (and still are) many ways of understanding authoritative literature or scripture. Therefore, we must not impose a static notion of 'canon' on the early period of our culture and in turn denigrate some texts with labels such as 'non-canonical', since such terms are anachronistic designations that were only later imposed on the early documents. Fourth, the series emphasizes the need to include all relevant sources and documents, including non-literary data, and that all important methodologies - from archaeology and sociology to rhetoric and theology - should be employed to clarify the origin and meaning of the documents. Fifth, scientific research is at the foundation of these publications which are directed to scholars and those interested in Jewish and Christian origins.

Gerbern S. Oegema is Professor of Biblical Studies and Director of the Centre for Research on Religion at McGill University James H. Charlesworth is George L. Collord Professor of New Testament Language and Literature at Princeton Theological Seminary and director of the seminary's Dead Sea Scrolls Project. He is the author of The Beloved Disciple (Trinity) and co-editor of the Trinity Press Faith and Scholarship Colloquies (FSC) Series.

This is an interesting collection of essays, arising from meetings of The Pseudepigrapha and Christian Origins seminar of SNTS between 2000 and 2006.--Sanford Lakoff