Paul's Use of the Old Testament in Romans 9.1-9

An Intertextual and Theological Exegesis 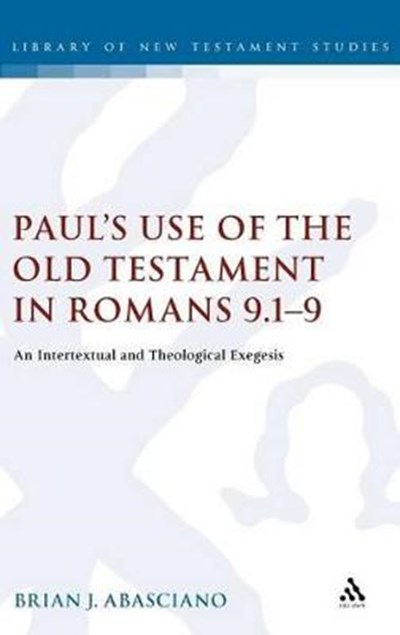 Paul's Use of the Old Testament in Romans 9.1-9

An Intertextual and Theological Exegesis

QTY
Add to Basket
Publisher: Bloomsbury Publishing PLC
ISBN: 9780567030733
Number of Pages: 280
Published: 07/02/2006
Width: 15.6 cm
Height: 23.4 cm
Description Author Information Reviews
This investigation builds upon recent developments in the study of Paul's use of Scripture that center around the concept of "intertextuality." Abasciano uses an exegetical method that incorporates into a thorough traditional exegesis a comprehensive analysis of Paul's use of Scripture against the background of interpretive traditions surrounding the texts alluded to, with great emphasis placed on analyzing the original contexts of Paul's citations and allusions. Such an intertextual exegesis is conducted in Romans 9:1-9 with an awareness of the broader unit of chapters 9-11 especially, and also the epistle as a whole. The study finds that many of the themes Paul deals with in Romans 9-11 are also present in ancient Jewish and Christian interpretive traditions surrounding the passages he invokes, and more importantly, that Paul's scriptural quotations and allusions function as pointers to their broad original contexts, from which he developed much of the form, content, and direction of his argument, holding significance for a number of exegetical details as well as broader themes and rhetorical movements. The final chapter seeks to draw conclusions concerning the significance of Paul's use of the Old Testament in Romans 9:1-9 for the exegesis and theology of Romans and for Pauline intertextuality. The identity of the true people of God is central to Romans 9-11 and the epistle. And Paul's use of Scripture is contextual and referential, calling for attention to Pauline intertextuality in standard exegetical procedure. JSNTS 301

Brian J. Abasciano earned his Ph.D. in divinity from the University of Aberdeen and pastors at Faith Community Church in Hampton, New Hampshire.

'I find Abasciano's study convincing. It is marked by careful, detailed, and fully contextualized exegesis. At the same time, the author never loses sight of the big picture. Accordingly, Abasciano has provided us with a fine example of the synergy of exegesis and theology.' - Craig A. Evans, The Catholic Biblical Quaterly--Sanford Lakoff "Catholic Biblical Quarterly "