Cutting Too Close for Comfort

Paul's Letter to the Galatians in Its Anatolian Cultic Context 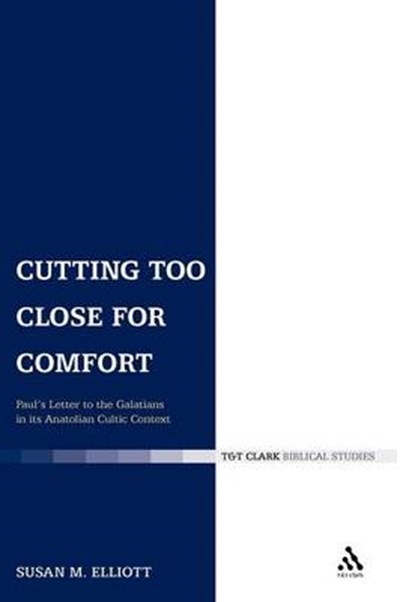 Cutting Too Close for Comfort

Paul's Letter to the Galatians in Its Anatolian Cultic Context

QTY
Add to Basket
Publisher: Bloomsbury Publishing PLC
ISBN: 9780567034359
Number of Pages: 412
Published: 15/04/2008
Width: 15.6 cm
Height: 23.4 cm
Description Author Information Reviews
In Cutting Too Close for Comfort, Susan Elliot considers Paul's letter to the Galatians in its Anatolian cultic context. What does circumcision have to do with castration? Self-castrated devotees of the Mother of the Gods travelled in the central Anatolian territory where the audience of Paul's letter to the Galatians lived. The goddess was identified with many of the region's mountains. In a goddess-possessed frenzy, these galli castrated themselves and became lifetime cultic representatives as her slaves. Cutting Too Close For Comfort offers a thick description of this cult and other aspects of the Anatolian cultic context to provide solutions to several persistent puzzles in the letter. Starting with problems in the so-called "Hagar and Sarah" passage (4.21-5.1), Elliot argues that Paul attempts to dissuade his audience from being circumcised by identifying circumcision with the enslaving self-castration of the galli and by portraying the Law as a Mountain Mother. The Anatolian background is also seen in Paul's Flesh-Spirit dichotomy in Gal. 3.1-5 and in the Two Ways form in Galatians 5-6.

Susan Elliott (The Rev. Susan M. Elliott, M. Div., Ph.D.) earned a Ph.D. in New Testament and Early Christianity in 1997 from Loyola University Chicago. Her primary expertise is the cult of Cybele and Anatolian popular religiosity. She has taught courses at Iliff School of Theology and Loyola University Chicago and was a core faculty member of a lay ministry program of the UCC and Disciples in the Rocky Mountain area. She has served churches in Illinois, Colorado, and Minnesota as well as in urban and justice ministries in Chicago and economic development work in rural Mexico.

"'In this fascinating and timely monograph Susan Elliott seeks to understand Paul's letter to the Galatians, and in particular certain problematic metaphors and issues in the local context of Galatia. The sad fact is that, despite the amount of recent work devoted to this letter of Paul, such considerations of its specifically Gentile context have been lacking. Elliott's monograph should be seen as, one hopes, the first of several works trying to redress this imbalance. Her work is thorough, displaying an in-depth knowledge and familiarity not only with recent Pauline scholarship but also with classical scholarship and solid biblical exegesis of previous generations, spanning back well into the first few centuries after the one in which Paul wrote.' Review of Biblical Literature"