Linguistic Evidence for the Pre-exilic Date of the Yahwistic Source 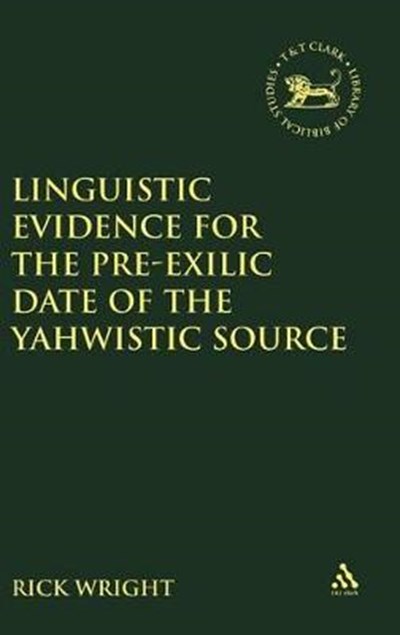 Linguistic Evidence for the Pre-exilic Date of the Yahwistic Source

QTY
Add to Basket
Publisher: Bloomsbury Publishing PLC
ISBN: 9780567041210
Number of Pages: 220
Published: 01/05/2005
Width: 15.6 cm
Height: 23.4 cm
Description Author Information Reviews
For the past few decades a growing number of scholars have attempted to overthrow the traditional Wellhausian view that the so-called 'Yahwist' or 'J' source of the Pentateuch is the oldest of the four major sources. These scholars have argued that J was composed during the exilic or post-exilic periods of ancient Israel. Their arguments have focused on the literary, historiographic, and theological characteristics of 'J'. This book attempts to re-evaluate on linguistic grounds such efforts to place the Yahwist source in the exilic or post-exilic periods. The study employs the methodology developed most prominently by Avi Hurvitz for identifying characteristic features of post-exilic Hebrew ('Late Biblical Hebrew'). This divides the language of the Hebrew Bible into three main chronological stages: Archaic Biblical Hebrew (ABH), Standard Biblical Hebrew (SBH), and Late Biblical Hebrew (LBH). Wright examines 40 features of J for which useful comparisons can be made to LBH and finds no evidence of LBH in the entire Yahwist source. Therefore it is unlikely that J was composed during the post-exilic period. Moreover since Hurvitz has shown that the exilic period was a time of transition between SBH and LBH such that late features began to occur in exilic texts, the author concludes on linguistic grounds that J was most likely composed during the pre-exilic period of ancient Israel.

Richard M. Wright serves as pastor of Church of the Nations and as Minister of Missions, University Baptist Church, Baton Rouge, Louisiana and is an adjunct professor of Jewish Studies, Tulane University, New Orleans, Louisiana.

"The principles that govern morphology, syntax, lexems, phraseology, and the examination of Persian loanwords are some of the linguistic tools employed by Wright as he sets out to determine the dating of the 'J' source. His very detailed, scholarly study leads him to conclude that 'J' lacks linguistic features associated with the kinds of late Hebrew found in post-exilic works like Chronicles. Thus he argues for a pre-exilic date for these passages" -The Bible Today, May/June 2006" "