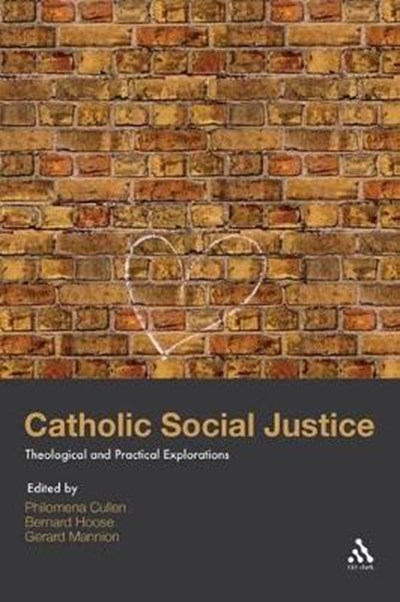 QTY
Add to Basket
Publisher: Bloomsbury Publishing PLC
ISBN: 9780567045423
Number of Pages: 224
Published: 14/06/2007
Width: 23.4 cm
Height: 15.6 cm
Description Author Information Reviews
Published in association with Caritas (the Catholic Church's agency for social justice), this book draws together a distinguished panel of academics and practitioners involved in the area of social justice. Combining theory and practice, the book explores issues facing the church and its role in today's society and the relationship between Theology, Social Justice and Social Spirituality. The book looks at how the church identifies its social priorities today, allocates its resource, shapes, facilitates and governs its practices, relates to and seeks to influence civil and secular society. In today's climate, the emerging relationship between religion and society is a matter of intense public interest and the book will also address the role of the church/faith in public life. The book also raises questions related to the nature of social ethics and social spirituality today. Particular problems and challenges pose pertinent questions both in relation to the church and society, and these also demand theological reflection, dialogue and exploration. Such themes include human liberation and freedom, globalisation, marginalisation, the changing anthropological bases of social ethics, as well as theological attempts to understand how the worlds of work and leisure relate to human being in both its individual and communal contexts.

Philomena Cullen is the Social Policy Co-ordinator of Caritas-Social Action in England and Wales, UK. Trained in theology, philosophy and social studies, she is also a qualified social worker. She was educated at New College, Oxford University and at Durham University, UK. Bernard Hoose lectures in Christian Ethics at Heythrop College, University of London, UK. His publications include Proportionalism: The American Debate and its European Roots, (Georgetown University Press) 1987, Received Wisdom? Reviewing the Role of Tradition in Christian Ethics (Geoffrey Chapman, 1994). He is editor of Christian Ethics: An Introduction (Cassell, 1998), Authority in the Roman Catholic Church (Ashgate, 2002) and Authority in Roman Catholicism (Matthew James, 2002). He presently serves on the Theology Commission of Caritas-Social Action. Gerard Mannion is Associate Professor in Theology and Religious Studies at Liverpool Hope University, UK. Previously, he was Senior Lecturer in Systematic Theology, Ecclesiology and Ethics at Trinity & All Saints College, University of Leeds, UK, and also taught Philosophy, Doctrine and Ethics at Westminster College, Oxford, UK. He is presently a committee member of the Catholic Theological Association of Great Britain, member of the American Academy of Religion and was a 2004 Coolidge Fellow at Union Theological Seminary, Columbia University, USA.

'This collection of fourteen essays originated from the UK charity, Caritas Social Action. The first half of the book focuses on 'theological explorations in social justice and social spirituality', while the latter half turns to 'the practice of social spirituality'. Although socially located in Catholic Christianity in Britain the contributors are ecumenical and international, thus promising a wide exploration of the theology and practice of social justice in the twenty-first century.' Victor Lee Austin, Saint Thomas Church Fifth Avenue New York--Sanford Lakoff