Rashi - Linguist despite Himself 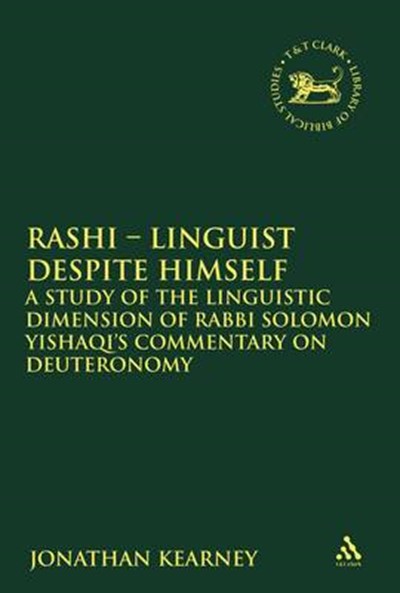 Rashi - Linguist despite Himself

QTY
Add to Basket
Publisher: Bloomsbury Publishing PLC
ISBN: 9780567438560
Number of Pages: 224
Published: 28/10/2010
Description Author Information Reviews
The commentary on the Torah of the eleventh-century French rabbi, Solomon Yishaqi of Troyes (better known as Rashi), is one of the major texts of mediaeval Judaism. Rashi's commentary has enjoyed an almost canonical status among many traditional Jews from mediaeval times to the present day. The popularity of his Torah commentary is often ascribed to Rashi's skillful combination of traditional midrashic interpretations of Scripture with observations on the language employed therein. In this respect, Rashi is often presented as a linguist or grammarian. This book presents a critical reappraisal of this issue through a close reading of Rashi's commentary on the book of Deuteronomy. Falling into two major sections, Part One (Contexts) presents a theoretical framework for the detailed study in Part Two (Texts), which forms the main core of the book by presenting a detailed analysis of Rashi's commentary on the book of Deuteronomy.

Dr Jonathan Kearney lectured in Hebrew and Arabic in University College Dublin between 1997 and 2007. At present he lectures in Jewish and Islamic Studies in St Patrick's College, Maynooth.

"Could be assigned as suitable reading for advanced undergraduates or those beginning graduate study; it is a neat, self contained, and concise presentation with good references for further reading...Kearney is to be congratulated for the overall clarity with which he presents his arguments. By the end of the volume, my one overriding thought was that the author must be an excellent classroom lecturer, with a real gift for presenting complex arguments in an accessible way...All in all, this is a well conceived and executed book that will have a variety of uses. The earlier chapters will be suitable for the classroom and the later ones for research." - Siam Bhayro, "Exeter University"