Great Sermon Tradition as a Fiscal Framework in 1 Corinthians

Towards a Pauline Theology of Material Possessions 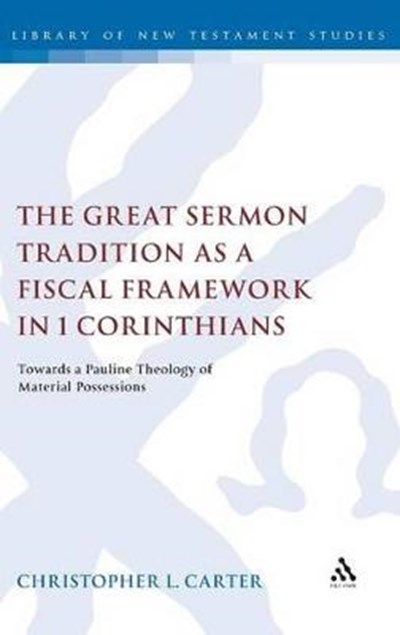 Great Sermon Tradition as a Fiscal Framework in 1 Corinthians

Towards a Pauline Theology of Material Possessions

QTY
Add to Basket
Publisher: Bloomsbury Publishing PLC
ISBN: 9780567473042
Number of Pages: 288
Published: 03/12/2009
Width: 15.6 cm
Height: 23.4 cm
Description Author Information Reviews
This text addresses two separate but related questions. Firstly, what is Paul's theology of material possessions, and secondly, what is the source of the apostle's thought on this subject? Carter endeavours to answer these questions by posing the hypothesis that Paul owes his pecuniary thought to the synoptic sermon tradition. Unlike other studies that investigate this link, Carter does not appeal to verbal parallels to establish this theory. Rather, he demonstrates a continuity in the broad fiscal thought of Jesus and Paul. This is accomplished by first demonstrating the plausibility of Paul's acquaintance with the dominical tradition through evidence related to the apostle's historical environment and his extant writings. The author then establishes the likelihood that Paul knew the pre-synoptic sermon tradition because of its ubiquity in early church discipleship, the judgment of form critical scholars, and its pervasive resonances in Pauline literature. From this point of embarkation, Carter moves on to articulate the broad fiscal thought of the synoptic sermons. It is found that the synoptic sermons' fiscal material has a pervasively eschatological orientation, and that in the sermons, Jesus seeks to redefine the financial worldview of Christian disciples. Having examined the synoptic sermons, their fiscal thought is compared with that expressed by Paul in 1 Corinthians. Through the course of this comparison, alternate sources in Jewish and Hellenistic literature are considered as potential explanations for any correspondences. Ultimately, the study concludes that Jesus' and Paul's financial thought evidence remarkable symmetry that cannot be explained by a shared cultural environment. Consequently, it is determined that Paul very likely depends on the dominical tradition for the contours of his financial thought.

An Assemblies of God missionary serving at Asia Pacific Theological Seminary in the Philippines, Christopher Carter teaches in the areas of New Testament and Hermeneutics. He holds a Ph.D. in New Testmant from the University of Aberdeen.

"An Assemblies of God missionary, Carter steps into the fray that has raged for two centuries on whether Paul invented Christianity or faithfully followed the footsteps of Jesus. It turns out, however, that he is merely crossing that battlefield to get to the virtually unexplored territory of Paul's theology of material possessions. Paul's attitude towards possessions resonates strongly with the teaching of Jesus as represented in the synoptic Gospels, he says, and that double track marks the route of his study. He considers the authenticity of the great sermon tradition, Paul's general interest in the historical Jesus and his specific knowledge of the great sermon tradition, the fiscal worldview of the great sermons, 1 Corinthians vis-a-vis the great sermon tradition, and Paul and Jesus viv-a-vis Jewish and Greco-Roman fiscal thought." -Eithne O'Leyne, BOOK NEWS, Inc.