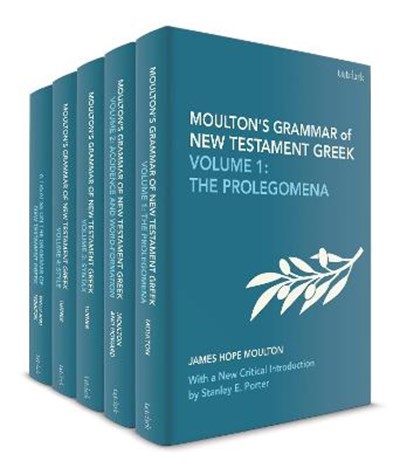 QTY
Add to Basket
Publisher: Bloomsbury Publishing PLC
ISBN: 9780567662422
Published: 28/11/2019
Description Author Information Reviews
Now updated in a five-volume set this classic grammar of New Testament Greek, begun in 1906 by James Hope Moulton and completed by William Francis Howard, and Nigel Turner, and the supplementary volume by Moulton's father supplied with it, cover every aspect of the Greek language in the New Testament. With thought-provoking analysis and a multitude of invaluable charts and indices it continues to act as an invaluable resource for advanced students of New Testament Greek today. Each of the four volumes, and the 'Winer-Moulton' volume also included, features a lengthy critical introduction and bibliography by Stanley E. Porter, one of the leading scholars of New Testament Greek, who provides critical reflection on the style and approach used in this classic work, as well as a discussion of developments in the study of New Testament Greek over the last 40 years. Volume 1: The Prolegomena introduces foundational premises upon which the subsequent three volumes build, providing a sketch of the language of the New Testament. Volume 2: Accidence and Word-Formation deals with three essential components of New Testament Greek: sounds and writing, accidence (word inflection, noun declension, and verb conjugation), and word formation. Volume 3: Syntax focuses on the construction of a sentence. Divided into two parts, it begins with a detailed discussion of nouns, adjectives, verbs and pronouns, to give the reader a clear and comprehensive understanding of the individual elements making up the language. Part Two concerns the complete sentence and its syntax, featuring sections on the ordinary simple sentence and its construction. Volume 4: Style examines the diverse styles of writing exhibited by each author of the New Testament. It explores the grammatical and other linguistic features which distinguish the work of one author from that of another, attempting to isolate and identify varying techniques. A Treatise on the Grammar of New Testament Greek is a classic work on the use of Greek in exegesis.

James Hope Moulton (1863-1917) was a Wesleyan minister and held various academic appointments, including as Greenwood Professor of Hellenistic Greek and Indo-European Philology at the University of Manchester, UK Wilbert Francis Howard (1880-1952) was a pupil of James Hope Moulton and authored Christianity According to St. John, The Romance of New Testament Scholarship, and The Fourth Gospel in Recent Criticism and Interpretation. Rev. William Fiddian Moulton (1835-1898) was an English Methodist minister, Biblical scholar and school instructor, where he taught Greek grammar. Nigel Turner was Reader in Theology at the University of Rhodesia, Zimbabwe. Stanley E. Porter is President, Dean and Professor of New Testament, McMaster Divinity College, Canada.