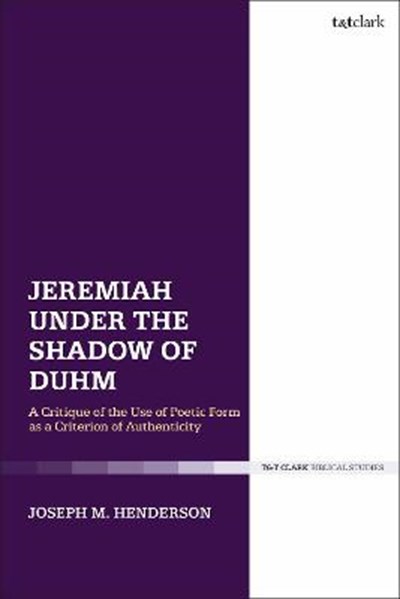 eBook FAQ
Add to Basket
Publisher: Bloomsbury Publishing PLC
ISBN: 9780567676467
Number of Pages: 400
Published: 14/11/2019
Width: 15.6 cm
Height: 23.4 cm
Description Author Information Reviews
Joe Henderson offers a critique of the assumption that poetic form in the book of Jeremiah indicates authenticity. This assumption undergirds Bernhard Duhm's reconstructions (1901) of the prophet's biography and the book's composition, the basic components of the dominant paradigm for twentieth-century Jeremiah scholarship. Henderson argues that Duhm's model is best understood as an attempt to bring the book into conformity with nineteenth-century systems of aesthetics, historiography, and theology-and with the Grafian reconstruction of the history of Israel's religion. The accord between these systems and Duhm's assumption about poetic form has less to do with their common grasp of the historical reality of Hebrew prophecy than with their common roots in the Romantic theory of prophetic and poetic inspiration-a theory forged by Robert Lowth in his exposition (1752) of the poetry he found in the prophetic books. Henderson contends that continued adherence to Duhm's foundational assumption has held back recent attempts to "move beyond Duhm" and overcome the fragmentation of the book entailed by his model. Rhetorical critics, who maintain that Jeremiah 2-10 is unified by the structural devices of the historical prophet, and redaction critics, who maintain that Jeremiah 11-20 is unified by the theological agenda of Deuteronomistic editors, both rely on the assumed authenticity of the poetry. Henderson observes that although these scholars have uncovered evidence of dramatic presentation in Jeremiah 2-20, they have failed to see that the dramatic nature of these chapters undermines their use for Duhm's historical-critical projects and reveals what actually unifies them-narrative progression.