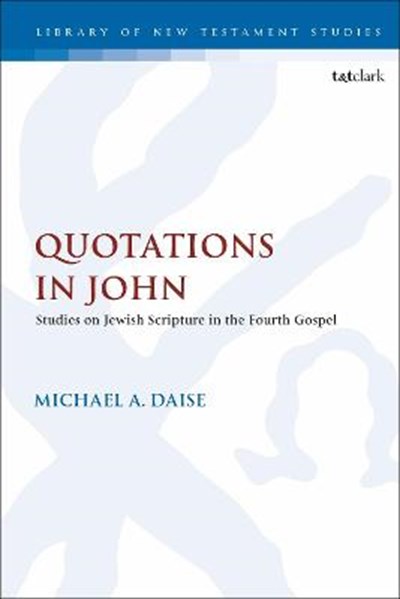 eBook FAQ
Add to Basket
Publisher: Bloomsbury Publishing PLC
ISBN: 9780567681799
Number of Pages: 264
Published: 26/12/2019
Width: 15.6 cm
Height: 23.4 cm
Description Author Information Reviews
Michael A. Daise identifies literary features found in six quotations in the Fourth Gospel, suggesting they should be revisited as clusters rather than as discrete units. Three quotations are the only ones whose introductory formulae explicitly ascribe them to Isaiah; three are the only ones cast as being 'remembered' by Jesus' disciples; and each of these groupings forms an inclusio within the Book of Signs which, when combined with the other, produces a chiasmus to Jesus' public ministry. Daise examines these clusters in three studies, addressing their exegetical issues and theological implications. After an introductory apologia for an historical-critical and theological approach, the first two studies distil narrative themes embedded in the Isaianic and 'remembrance' inclusios. The third study then reconstructs the synthesis of these themes created by the chiasmus, and translates its key elements into theological categories. Daise concludes that, while the Isaianic inclusio brings 'closure' to the Book of Signs -by disclosing the angelic cause of the Jews' unbelief - the 'remembrance' inclusio creates an anticipation of the Book of Glory - by casting Jesus as poised to establish a new dynasty with the casting out that angelic cause. Daise further argues that this broader storyline carries ramifications for an array of motifs in the Fourth Gospel's theological taxonomy: in particular its christology, soteriology, eschatology, ecclesiology and pneumatology.

Michael A. Daise is Walter G. Mason Professor of Religious Studies at the College of William and Mary, USA.