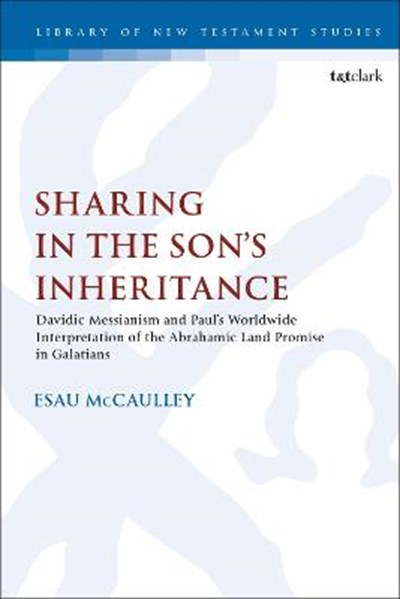 eBook FAQ
Add to Basket
Publisher: Bloomsbury Publishing PLC
ISBN: 9780567685926
Number of Pages: 240
Published: 18/04/2019
Width: 15.6 cm
Height: 23.4 cm
Description Author Information Reviews
This book explores the link between Paul's belief that Jesus is Israel's Messiah, and his interpretation of the Abrahamic Land Promise in Galatians. Countering claims that Paul replaces the Promised Land with the gift of the Spirit or salvation, Esau McCaulley argues that Paul expands this inheritance to include the whole earth; believing that, as the seed of Abraham and David, Jesus is entitled to the entire world as his inheritance and kingdom. McCaulley argues that scholars have neglected Paul's expanded interpretation of the inheritance of the earth, rarely appreciate the role that messianism plays in Galatians, and fail to acknowledge that Second Temple authors often portrayed royal and messianic figures as God's means of fulfilling the promises made to Abraham and Israel, via the establishment of kingdoms. Through a comparison of texts from the Pseudepigrapha, apocrypha, and the Dead Sea Scrolls with Galatians 3:1-4:7, 5:21, McCaulley argues Paul's interpretation of Jesus's death is a manifestation of Second Temple messianism because it ends the covenant curses outlined in Deuteronomy and begins the restoration of the inheritance to Abraham's offspring through the establishment of Jesus's worldwide kingdom; he concludes that Paul's interpretation of the Abrahamic inheritance is inseparable from his belief that Jesus is Israel's Messiah.