Mark 15:39 as a Markan Theology of Revelation

The Centurion's Confession as Apocalyptic Unveiling 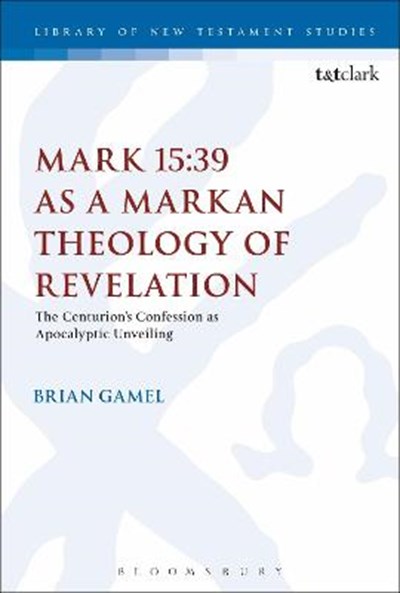 Mark 15:39 as a Markan Theology of Revelation

The Centurion's Confession as Apocalyptic Unveiling

eBook FAQ
Add to Basket
Publisher: Bloomsbury Publishing PLC
ISBN: 9780567688095
Number of Pages: 224
Published: 18/04/2019
Width: 15.6 cm
Height: 23.4 cm
Description Author Information Reviews
In the Gospel of Mark, Jesus' arrest, trial and execution ends with the Roman centurion who oversees the death process proclaiming Jesus as God's son. Gamel explores two key questions in relation to this moment: what does the centurion mean when he says that Jesus is God's son, and why does he say it? The confession is not made on the basis of any signs nor from any indication that he perceives Jesus' death as honourable or exemplary. This apparent lack of motivation itself highlights a key Markan theme: that this insight is revealed by an apocalyptic act of God, signalled by the tearing of the temple veil. Thus the confession, which we can understand to be made sincerely and knowledgeably, is the result of an act of God's revelation alone. Gamel explores the theory of Mark depicting a story in which all human characters exhibit varying levels of blindness to the spiritual realities that govern their lives. By making a thorough examination of Mark's Gospel - while placing primary focus on the centurion, the study is unlimited and presents a serious examination of the whole Gospel - Gamel concludes his argument with the point that, at the foot of the cross, this blindness is decisively confronted by God's apocalyptic act. The offer of sight to the centurion demonstrates the reconciliation of God and humanity which are otherwise in Mark's Gospel repeatedly presented as antagonistic spheres. Finally, the fact that revelation is offered to a Gentile highlights the inclusion of the nations into the promises of Israel.