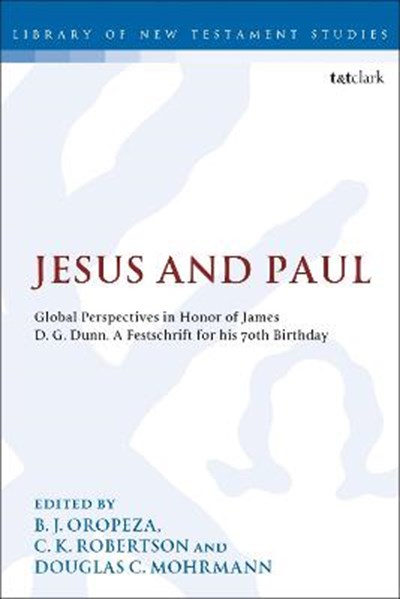 QTY
Add to Basket
Publisher: Bloomsbury Publishing PLC
ISBN: 9780567689283
Number of Pages: 272
Published: 27/06/2019
Width: 15.6 cm
Height: 23.4 cm
Description Author Information Reviews
James D. G. Dunn has been one of the most influential New Testament scholars of the late 20th and early 21st centuries. His works have altered the very way biblical theologians view Jesus and Paul. This book is written in gratitude of his influence and mentorship. The focus of the work parallels the major research of Dunn's career. It emphasizes the life and teachings of Jesus as remembered by his disciples, the new perspective on Paul, teachings in the Pauline letters, and relevant topics related to ancient Judaism, the Law, Soteriology and Christology in the New Testament. In 2005 another festschrift for James D. G. Dunn's 65th birthday was published with essays by Professor Dunn's many colleagues and friends. In this volume, a new generation of scholars, who are being widely recognized in their own contributions and publications, now honour their former teacher and demonstrate to the scholastic community the breadth of his influence.

B.J. Oropeza is professor of Biblical and Religious Studies at Azusa Pacific University and Seminary, USA. He is founder and chair of the Intertextuality in the New Testament Consultation (SBL). Douglas C. Mohrmann is Associate Professor of Religion at Cornerstone University. Dr. Mohrmann co-founded and directed the Center for the Study of Antiquity and continues to research and publish on topics related to Early Judaism, Paul, and American Religion. He currently leads the Ancient Studies program at Cornerstone University. The Reverend Canon C. K. Robertson is Canon to the Presiding Bishop of The Episcopal Church, a former professor of communications and ethics at Georgia College & State University and a Fellow of the Episcopal Church Foundation. Dr. Robertson presently serves on several national boards, including the Anglican Theological Review, a member of the Anglican Association of Biblical Scholars, and author or editor of numerous books and articles.