'All of You are One' 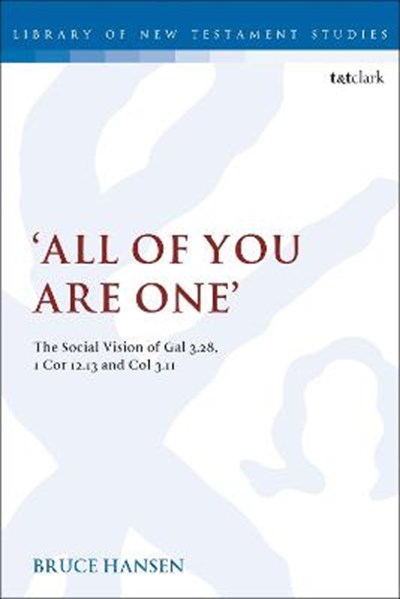 'All of You are One'

QTY
Add to Basket
Publisher: Bloomsbury Publishing PLC
ISBN: 9780567689313
Number of Pages: 256
Published: 27/06/2019
Width: 15.6 cm
Height: 23.4 cm
Description Author Information Reviews
Hansen argues against prevalent views that the unity formula employed in Gal 3.28, 1 Cor 12.13 and Col 3.11 reflects either a Hellenistic anthropology of ideal androgyny or a modern liberal conception of social equality. Rather, Hansen contends, attention to function and context demonstrates each epistle's vision of social unity. Insights from ethnic theory elucidate how epistles characterize this unity in terms of a new social identity, and the practices warranted by that identity. Furthermore, Hansen claims that because identity construction is continual, dynamic and discursive, alternate identities (e.g. ethnic, gender, religious, economic) within the new Christian communities, may be seen as influencing one another and may be termed as the collective Christian identity. Hansen employs theories from Ethnic study as tools for assessing how such overlapping identities persist and interact with one another. His analysis thereby demonstrates that the social unity promoted by this formula opposes cultural dominance by any particular group and, conversely reinforces the persistence of marginal social identities within new communities. The issue is then not one of gender equality, but of the equality that Paul wishes to develop between competing social groups.

Rev. Bruce Hansen, PhD (University of St. Andrews) is an ordained minister at San Francisco Christian Center and has been a campus minister with InterVarsity Christian Fellowship in the San Francisco Bay area for twenty-three years.