Paul and Epictetus on Law 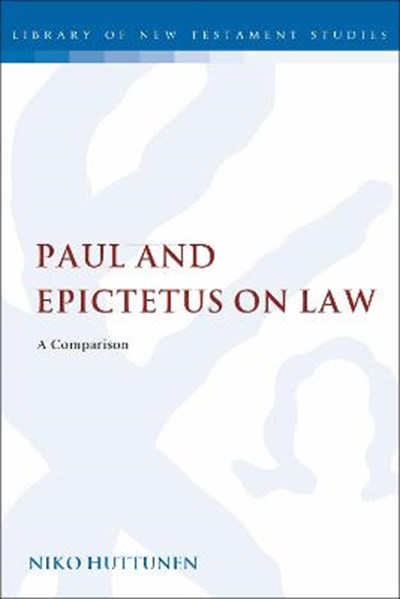 Paul and Epictetus on Law

QTY
Add to Basket
Publisher: Bloomsbury Publishing PLC
ISBN: 9780567689641
Number of Pages: 208
Published: 25/07/2019
Width: 15.6 cm
Height: 23.4 cm
Description Author Information Reviews
Paul's relationship with covenantal nomism has long been the subject of lively discussion. In this book Niko Huttunen presents a challenging new path to complement the general scholarly picture of Paul's teaching on law. Acknowledging that Stoicism permeated Paul's intellectual milieu, Huttunen compares Paul's sayings of law with those of Epictetus drawing comparisons as a result of careful methodological considerations. Pauline law is generally focused upon Paul's sayings on and relationship with the Torah. It is Huttunen's contention that Paul's ideas on law have clearer affinities with Stoic ideas than with the Torah. Throughout the course of the book Huttunen displays Paul's interpretation of the Torah with Stoic methods (1 Cor. 7-9), asserts that in some passages (Rom. 1-2 and Rom. 7) Paul's thinking is Stoic, not Platonic and demonstrates that Paul's famous "I"-passage (Rom. 7.7-25) owes much to Stoic anthropology and psychology. Where the latter is concerned Huttunen suggests that Epictetus' use of the first person presents a good analogy for Paul's employment of "I" as a rhetorical device. In further passages (e.g. Rom. 13-15) the comparison with Epictetus opens a window into ancient intellectual thinking in general. Epictetus' ideas of moral progress present an analogy both to the "works of law" and to Paul's moral exhortation. There are also similarities between Paul's figure of Christ and Epictetus' figure of Heracles. The comparison suggests further comparisons between Paul's treatment of law and other philosophers and schools.

Niko Huttunen is a researcher in New Testament studies at the University of Helsinki, Finland. He has published articles on Wirkungsgeschichte of the Bible and on the relationship between Stoicism and the New Testament.