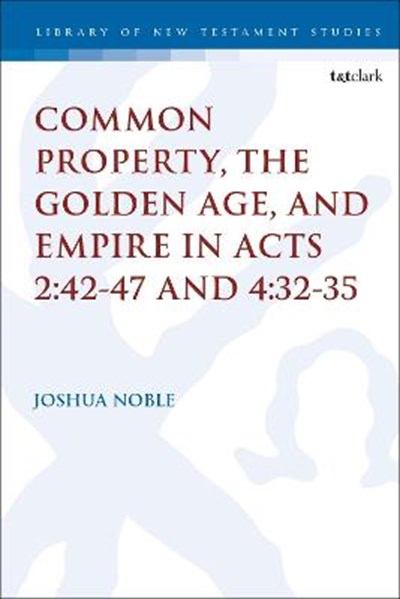 eBook FAQ
Add to Basket
Publisher: Bloomsbury Publishing PLC
ISBN: 9780567696434
Number of Pages: 208
Published: 21/04/2022
Width: 15.6 cm
Height: 23.4 cm
Description Author Information Reviews
Joshua Noble focuses on the rapid appearance and disappearance in Acts 2 and 4 of the motif that early believers hold all their property in common, and argues that these descriptions function as allusions to the Golden Age myth. Noble suggests Luke's claims that the believers "had all things in common" and that "no one claimed private ownership of any possessions"-a motif that does not appear in any biblical source- rather calls to mind Greek and Roman traditions that the earliest humans lived in utopian conditions, when "no one ... possessed any private property, but all things were common." By analyzing sources from Greek, Latin, Jewish, and Christian traditions, and reading Acts 2:42-47 and 4:32-35 as Golden Age allusions, Noble illustrates how Luke's use of the motif of common property is significant for understanding his attitude toward the Roman Empire. Noble suggests that Luke's appeal to this myth accomplishes two things: it characterizes the coming of the Spirit as marking the beginning of a new age, the start of a "universal restoration" that will find its completion at the Second Coming of Christ; and it creates a contrast between Christ, who has actually brought about this restoration, and the emperors of Rome, who were serially credited with inaugurating a new Golden Age.

Joshua Noble is a tutor at Thomas Aquinas College, USA.