Dating Acts in its Jewish and Greco-Roman Contexts 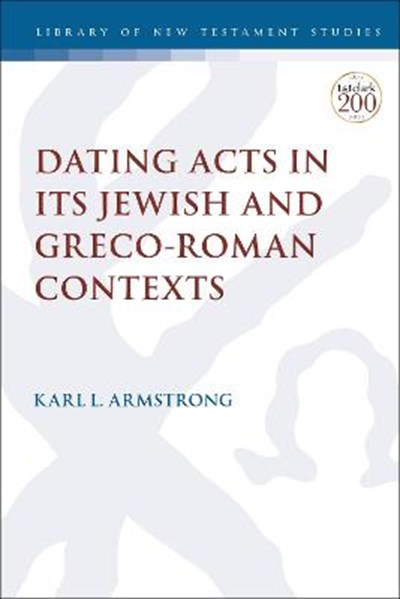 Dating Acts in its Jewish and Greco-Roman Contexts

eBook FAQ
Add to Basket
Publisher: Bloomsbury Publishing PLC
ISBN: 9780567696465
Number of Pages: 248
Published: 28/01/2021
Width: 15.6 cm
Height: 23.4 cm
Description Author Information Reviews
There has been consistent apathy in recent years with regard to the long-standing debate surrounding the date of Acts. While the so-called majority of scholars over the past century have been lulled into thinking that Acts was written between 70 and 90 CE, the vast majority of recent scholarship is unanimously adamant that this middle-range date is a convenient, political compromise. Karl Armstrong argues that a large part of the problem relates to a remarkable neglect of historical, textual, and source-critical matters. Compounding the problem further are the methodological flaws among the approaches to the middle and late date of Acts. Armstrong thus demonstrates that a historiographical approach to the debate offers a strong framework for evaluating primary and secondary sources relating to the book of Acts. By using a historiographical approach, along with the support of modern principles of textual criticism and linguistics, the historical context of Acts is determined to be concurrent with a date of 62-63 CE.