Transformational Role of Discipleship in Mark 10:13-16 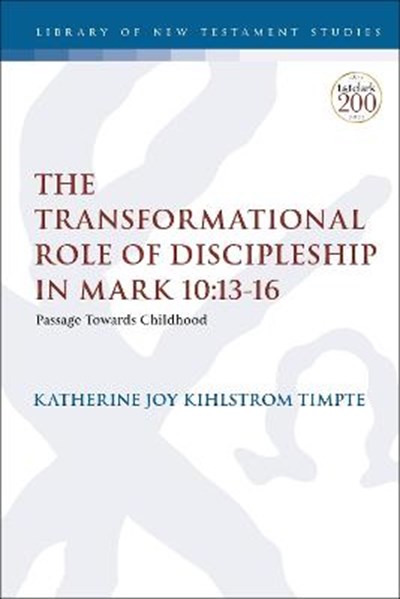 Transformational Role of Discipleship in Mark 10:13-16

eBook FAQ
Add to Basket
Publisher: Bloomsbury Publishing PLC
ISBN: 9780567699701
Number of Pages: 176
Published: 04/11/2021
Width: 15.6 cm
Height: 23.4 cm
Description Author Information Reviews
Katherine Joy Kihlstrom Timpte addresses a gap in scholarship by answering the question: "how is a child supposed to be the model recipient of the kingdom of God?" While most scholarship on Mark 10:13-16 agrees that children are metaphorically employed because of their qualities of dependence, Timpte argues that it is more specifically an image of the disciple's radical transformation, which both mirrors and reverses the traditional rites of passage by which a child became an adult. Timpte suggests that Jesus, by insisting that one must enter the Kingdom of God as a child, invokes two interlacing images. First, to enter the Kingdom of God, one must be fundamentally transformed and changed. Second, this transformation reverses the rite by which a child would have become an adult, removing the adult's superior status. Beginning with a summary of the scholarship surrounding children in the Bible, Timpte explores the perception of children in the ancient world, their rites of passage and entrance into adulthood, and contrasting this with the processing of entering the kingdom of God, while also highlighting childish characters in Mark. Timpte concludes that to enter into the kingdom as a child means that one must strip off those things one gained by leaving childhood behind: wealth, respect, family, much like Jesus, who throughout Mark's Gospel moves from powerful to powerless, respected to despised, and accepted by all to rejected even (seemingly) by God. Jesus models transformation to childhood in an emphasis on what the Kingdom of God is like.