The Complete Text Compiled by St.Nikodimos of the Holy Mountain and St.Makarios of Corinth 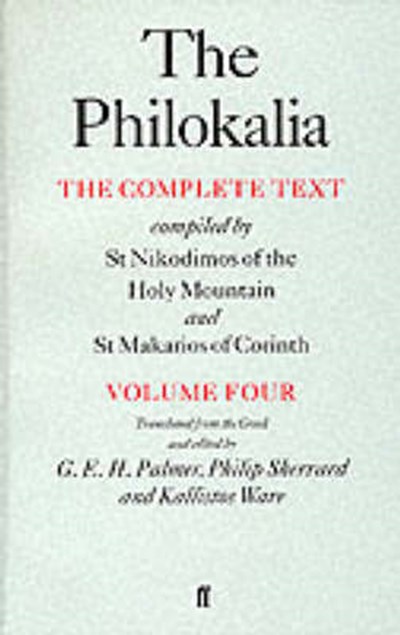 The Complete Text Compiled by St.Nikodimos of the Holy Mountain and St.Makarios of Corinth

eBook FAQ
Add to Basket
Publisher: Faber and Faber
ISBN: 9780571193820
Published: 06/07/1998
Description Author Information Reviews
"The Philokalia" is a collection of texts on prayer and the spiritual life, written between the fourth and fifteenth centuries by masters of the Orthodox Christian tradition. First published in Greek in 1782, translated into Slavonic and later into Russian, this is the first complete translation into English. It is made from the original Greek, and will be completed in five volumes. "Volume IV" contains some of the most important writings in the entire collection. St Symeon the New Theologian speaks about the conscious experience of the Holy Spirit and about the vision of the divine and uncreated Light. St Gregory of Sinai provides practical guidance concerning the life of the Hesychast and the use of the Jesus Prayer. St Gregory Palamas discusses the distinction between the essence and the energies of God.

Gerald Eustace Howell Palmer (1904-84) studied at Oxford and was the MP for Winchester from 1935 until 1945. He collaborated in many translations, including The Philokalia. The Most Reverend Kallistos (Ware), Metropolitan of Diokleia was born in England in 1934 and studied at Oxford. He embraced the Orthodox faith in 1954 and was ordained in 1966, in the same year he became a lecturer at Oxford. He was appointed to a Fellowship at Pembroke College, Oxford, in 1979 and was consecrated as auxiliary bishop in 1982. He retired in 2001 and was elevated to Metropolitan in 2007. He is the author of The Orthodox Church and The Orthodox Way.

"A collection of texts written in Greek between the fourth and fifteenth centuries by spiritual masters of the Orthodox tradition. Compiled in the 18th century . . . it has had a profound influence on the spiritual life of the Eastern churches" --"Theology Digest "