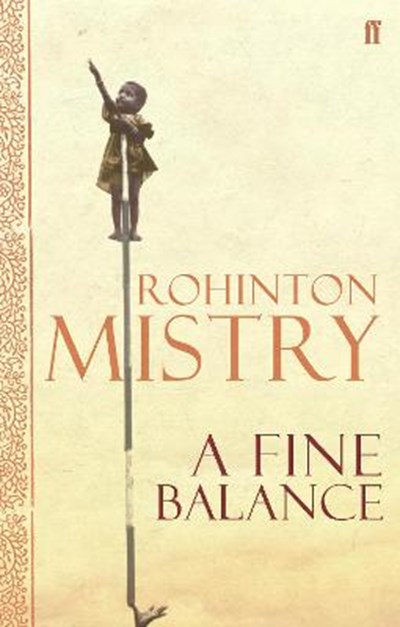 QTY
Add to Basket
Publisher: Faber & Faber
ISBN: 9780571230587
Number of Pages: 624
Published: 19/10/2006
Width: 12.6 cm
Height: 19.8 cm
Description Author Information Reviews
'A towering masterpiece by a writer of genius.' Independent India, 1975. An unnamed city by the sea. The government has just declared a State of Emergency. Amidst a backdrop of wild political turmoil, the lives of four unlikely strangers collide forever. An epic panorama of modern India in all its corruption, violence, and heroism, A Fine Balance is Rohinton Mistry's prize-winning masterpiece: a Dickensian modern classic brimming with compassion, humour, and insight - and a hymn to the human spirit in an inhuman state. 'A masterpiece of illumination and grace. Like all great fiction, it transforms our understanding of life.' Guardian 'Magical.' New York Times 'Monumental.' Time 'Astonishing.' Wall Street Journal What readers are saying: 'One of the most layered and beautifully executed books I've ever read ... Easily one of my all time favourite books!' 'Many say that the mark of a good book is that it stays with you; well, I read this several years ago and I still find myself thinking of the characters ... Beautiful.' 'What a storyteller, what a wide canvas he covers of India ... Wonderful.' 'One of the best and most entertaining books I have ever read ... I can't recommend it highly enough.' 'Often heartbreaking, always evocative ... A book to savour rather than to gallop through.' 'One of the best books I've read ... Not a book for the faint-hearted, but it is a book with a big heart.'

Rohinton Mistry is the author of a collection of short stories, Tales from Firozsha Baag (1987), and three novels that were all shortlisted for the Booker Prize: Such a Long Journey (1991), A Fine Balance (1996), and Family Matters(2002). His fiction has won, among other awards, the Commonwealth Writers Prize for Best Book (twice), The Los Angeles Times Award, The Giller Prize, The Governor-General's Award, and the Royal Society of Literature's Winifred Holtby Award. In translation, his work has been published in over thirty-five languages. In 2011, his body of work was shortlisted for the 2011 Man Booker International Prize. Born in Bombay, Mistry has lived in Canada since 1975.