Before She Knew Him 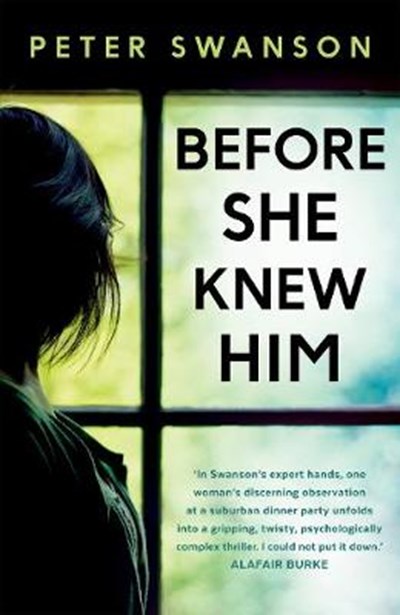 Before She Knew Him

Publisher: Faber & Faber
ISBN: 9780571340644
Number of Pages: 320
Published: 07/03/2019
Width: 15.3 cm
Height: 23.4 cm
Description Author Information Reviews
A Sunday Times and Observer Thriller of the Month, from the bestselling author of The Kind Worth Killing and All the Beautiful Lies 'They had a secret, the two of them, and there was no better way to start a friendship than with a secret.' When Hen and Lloyd move into their new house in West Dartford, Mass., they're relieved to meet, at their first block party, the only other seemingly-childless couple in their neighborhood, Matthew and Mira Dolamore. Turns out they live in the Dutch Colonial immediately next door. When they're invited over for dinner, however, things take a sinister turn when Hen thinks she sees something suspicious in Matthew's study. Could this charming, mild-mannered College Professor really be hiding a dark secret, one that only Hen, whose been battling her own problems with depression and medication, could know about? Lloyd certainly doesn't seem to believe her, and so, forced together, Hen and Matthew start to form an unlikely bond. But who, if anyone, is really in danger? From its deeply unsettling opening, Peter Swanson, the master of contemporary domestic thrillers, fashions a novel as brilliant, dark, coruscating and surprising as Patricia Highsmith and Ira Levin at their very best.

Peter Swanson's debut novel, The Girl With a Clock for a Heart (2014), was described by Dennis Lehane as 'a twisty, sexy, electric thrill ride' and was nominated for the LA Times book award. His second novel The Kind Worth Killing (2015), a Richard and Judy pick, was shortlisted for the Ian Fleming Steel Dagger and named the iBooks Store's Thriller of the Year, and was followed by two more critical and commercial hits, Her Every Fear (2017) and All the Beautiful Lies (2018). He lives with his wife and cat in Somerville, Massachusetts.