After Aquinas - Versions of Thomism 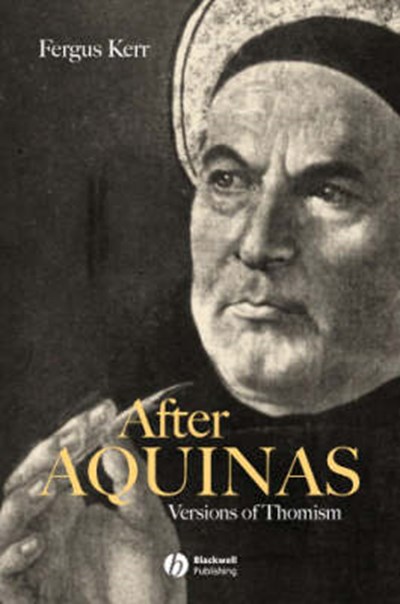 After Aquinas - Versions of Thomism

Publisher: John Wiley and Sons Ltd
ISBN: 9780631213130
Number of Pages: 264
Published: 15/08/2002
Width: 15.2 cm
Height: 23.1 cm
Description Author Information Reviews
Written by a leading theologian, this new account of the writings of Thomas Aquinas and their interpretation by modern commentators reflects the major revival of interest in his work. After Aquinas makes available in one volume all the material necessary for a rounded appreciation of Aquinas's work and his enduring influence. As well as revisiting Aquinas's own work, Kerr brings together a range of views that have previously appeared in disparate places, thereby exploring alternatives to the standard understanding of Aquinas's writings. This book therefore represents a major revisionist treatment of Thomism and its significance, combining useful exposition with original, creative thinking. After Aquinas will become essential reading for all undergraduate students and scholars interested in the work of this great theologian.

Fergus Kerr, OP is Prior of Blackfriars, University of Oxford and Honorary Senior Lecturer in Theology and Religious Studies at the University of Edinburgh. He is the editor of New Blackfriars, the monthly periodical of the English Dominicans, and one of the most influential Catholic theology journals in print. He was lately the recipient of an honorary DD from the University of Aberdeen, and delivered the Stanton Lectures in the University of Cambridge in 1994/95.

"Domenican scholar Kerr (Oxford and Edinburgh) has written one of the most engrossing and informative books on Thomas published in some time." Choice "This country's outstanding philosopher-theologian." Reviews in Religion and Theology of Fergus Kerr "Fergus Kerr presents us with some few decades of reflection on Aquinas, canvassing much of contemporary commentary in the process. The choice of topics represents a sounding that will offer at once the flavor and a sense of the rigorous dedication to inquiry which Aquinas represents. A thoroughly contemporary presentation of the nuances of this masterful thinker by an apprentice now master himself." Professor David Burrell, University of Notre Dame "Fergus Kerr OP demonstrates in this book how St. Thomas Aquinas is still at the heart of things, synthesising and refining philosophical and theological speech, and even where we do not see his influence, we still feel it. There is no-one better to introduce and explain the breadth and diversity of the study of Aquinas. After Aquinas: Versions of Thomism speaks with a strong and fluent voice: it is in short a tour de force. It ought to be on every theologian's bookshelf, and on every undergraduate reading list in Systematic Theology in Britain and America." Laurence Paul Hemming, Heythrop College, University of London "Kerr's analysis presents fresh insight into Aquinas' thought and the scholarship that has grown up around it, from Cajetan and Suarez to John Milbank and Eugene Rogers. It will be a valuable resource for all those new to Thomas as well as for those interested in exploring his thought in greater depth." First Things "[Kerr's] book is fun, and a rewarding one to read." Church Times "...provides a very useful service to those interested in the reception, in modern theology, of one of the greatest and most influential of all Christian theologians." Times Literary Supplement "This represents a crucial step in moving contemporary Thomism forward; for it is only once we stop teaching, naively, nothing but our own limited interpretations of Thomas's thought, instead attempting to present a more synthetic account, that we will enable our students to appreciate the complexity not only of Thomism, but indeed of Thomas himself." Tijdschrift voor Filosofie "There is often an illuminating sense of the anachronism of a modern view, the failure of an author to understand what Aquinas was concerned about or the reasons for his putting a point in a particular way." Theology "(I)t reviews competing interpretations of Aquinas's theology in an undogmatic, fair-minded, and perspicuous manner; not only beginning theology students but also specialists will learn much from such an approach." The Thomist "Fergus Kerr...has presented his readers with another theological tour de force, and again written with crystal clarity and accessibility." Regent's Reviews "Kerr is astonishingly well read, and, if you want to learn something about how differently Aquinas has been understood on a wide range of issues, After Aquinas is an excellent place to start. Indeed, there is nothing in print to compare with it." Theology Today "Aquinas is a boom subject and Fr Kerr uses decades of stuy to put him in perspective; but he has not lost the refreshing enthusiasm that he felt in his youth for the ontology of the brilliant old thinker." Spectator "..by focusing on the relationship between Thomas's thought and aome of the distinctive issues of modern theology, he is able to both correct widespread misreadings of Thomas, and to show the ongoing power and ecumenical relevance of his theology." Churchman "The beginner will imbide not just real knowledge of Aquinas from this book, but a vibrant Catholic and Dominican culture. The more advanced reader will find dazzling insight upon which to ponder, as well as intriguing pointers to a richer future synthesis. Catherine Pickstock, Emmanuel College Cambridge "After Aquinas is an invaluable resource for evaluating the rival ways that Aquinas has been used in recent scholarship." Scottish Journal of Theology