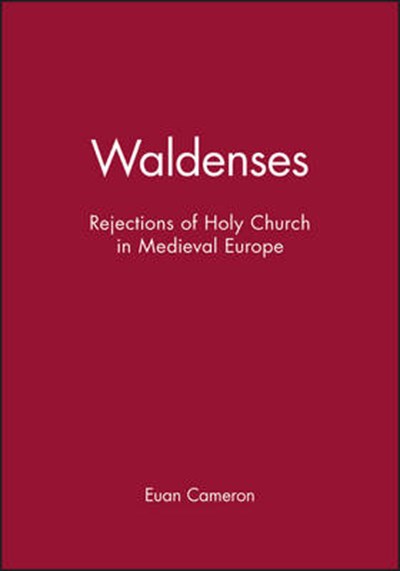 Publisher: John Wiley and Sons Ltd
ISBN: 9780631224976
Number of Pages: 352
Published: 01/12/2000
Width: 15.4 cm
Height: 22.9 cm
Description Author Information Reviews
This book provides the first full single-volume scholarly account in English of the "Waldenses" and examination of the concept of 'Waldensianism' from the late 12th century to the Reformation. 'Waldenses' is the name given to diverse and widely-scattered groups of religious dissenters since the time of the movement's reputed founder, a rich citizen of Lyon called Valdesius, in the late twelfth century. Though living within the culture of the Catholic Church, these people doubted the holiness of its priesthood and questioned its teachings about the destiny of souls after death. The various strands of this movement emerged and endured over a long period of time. In consequence some earlier historians assumed, rather than demonstrated, that 'Waldensian' heresy remained one coherent phenomenon throughout its life-span.They also tended to neglect some of the transient or 'untypical' aspects of the movement. This new book draws on primary sources to consider each of the manifestations of the movement in turn. It examines connections in space and time through correspondence and tradition between the different groups of Waldenses. It also asks what were the common threads in certain characteristics of religious practice, linking in differing degrees all the forms that the movement took.

"... exemplary in its clarity and comprehensiveness and will easily count as the standard treatment in the subject for years to come." Times Literary Supplement "[Cameron's] command of the difficult and controversial evidence is masterly throughout this study, and his grasp of the ideas which formed the movement, and the different approaches of the new Protestantism, is outstanding. This book will provide a starting-point for future study of the Waldenses." Journal of Theological Studies "A scholarly account ranging from the late twelfth century to the Reformation..." Missiology: An International Review "Waldenses is a lucid, nuanced, and intelligent assesment of the history of this diverse group of medieval dissenters.... Cameron's assesments are penetraing and sound... [the book] should find its way onto the bookshelves of many scholars and students interested in medieval religious cultures." Shannon McSheffrey, Concordia University