Can We Trust the Bible on the Historical Jesus? 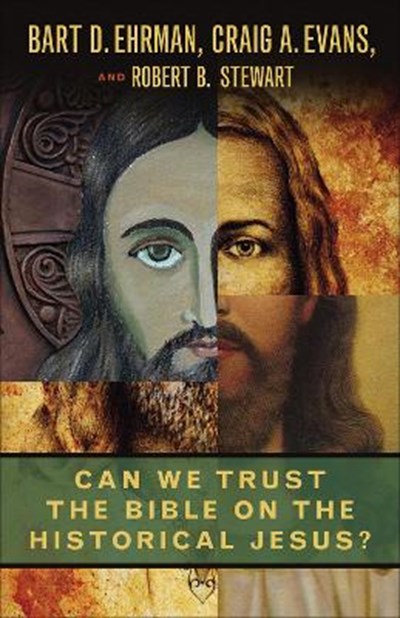 Can We Trust the Bible on the Historical Jesus?

This book features a learned and fascinating debate between two great Bible scholars about the New Testament as a reliable source on the historical Jesus. Bart Ehrman, an agnostic New Testament scholar, debates Craig Evans, an evangelical New Testament scholar, about the historical Jesus and what constitutes "history." Their interaction includes such compelling questions as: What are sound methods of historical investigation? What are reliable criteria for determining the authenticity of an ancient text? What roles do reason and inference play? And, of course, interpretation? Readers of this debate-regardless of their interpretive inclinations and biases-are sure to find some confirmation of their existing beliefs, but they will surely also find an honest and well-informed challenge to the way they think about the historical Jesus.

The result? A more open, better informed, and questioning mind, which is better prepared for discovering both truth and contrivance. The debate between Ehrman and Evans along with Stewart's introductory framework make this book an excellent primer to the study of the historical Jesus, and readers will come away with a deeper appreciation for the ongoing quest for the historical Jesus.

Bart D. Ehrman is a highly acclaimed scholar of the New Testament and the history of early Christianity. He is the James A. Gray Distinguished Professor of Religious Studies at the University of North Carolina at Chapel Hill. He is the author or editor of over thirty-one books and has been featured in the New Yorker and Time. In addition to appearances on the National Geographic channel, the History channel, the Discovery channel, BBC, and NPR's Fresh Air, Ehrman has written five New York Times bestsellers, including How Jesus Became God. With preeminent academic credentials, he is the editor and Greek-to-English translator of both volumes of The Apostolic Fathers in the Loeb Classic Library. Craig A. Evans is an esteemed, internationally recognized biblical scholar, author, and a regular guest on TV documentaries. He is John Bisagno Distinguished Professor of Christian Origins at Houston Theological Seminary. He was formally Payzant Distinguished Professor of New Testament at Acadia Divinity College. Before coming to Acadia, Evans taught at Trinity Western University in British Columbia for twenty-one years, where he directed the graduate program in biblical studies and founded the Dead Sea Scrolls Institute. He is the author or editor of more than fifty books and hundreds of articles and reviews. Evans has lectured at Cambridge, Oxford, Durham, and Yale. He also regularly lectures and gives talks at popular conferences and retreats on the historical Jesus, archaeology, the Dead Sea Scrolls, and the Bible. Robert B. Stewart is Professor of Philosophy and Theology and the Greer-Heard Chair of Faith and Culture at New Orleans Baptist Theological Seminary. Stewart was the Director of the Greer-Heard Point-Counterpoint Forum in Faith and Culture, which brought world-renowned scholars together in conversation and debate. Stewart has authored or edited twelve books, ten of which were debates or dialogues, which include numerous contributing essays by other highly respected scholars, such as John Dominic Crossan, Alister McGrath, Daniel Dennett, William Lane Craig,Ben Witherington III, Craig Evans, Bart Ehrman, and others.