Christianity and the Transformation of the Book

Origen, Eusebius, and the Library of Caesarea 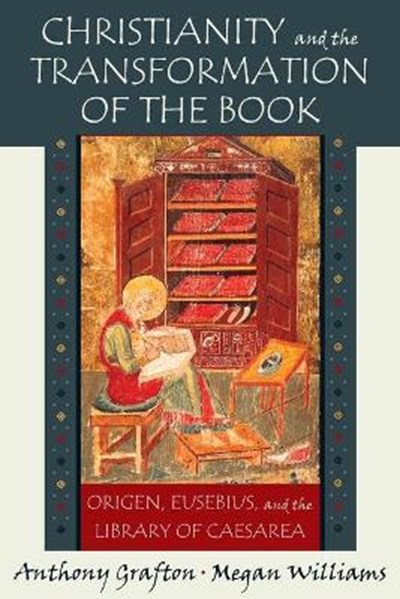 Christianity and the Transformation of the Book

Origen, Eusebius, and the Library of Caesarea

eBook FAQ
Add to Basket
Publisher: Harvard University Press
ISBN: 9780674030480
Number of Pages: 384
Published: 14/01/2009
Width: 14 cm
Height: 21 cm
Description Author Information Reviews
When early Christians began to study the Bible, and to write their own history and that of the Jews whom they claimed to supersede, they used scholarly methods invented by the librarians and literary critics of Hellenistic Alexandria. But Origen and Eusebius, two scholars of late Roman Caesarea, did far more. Both produced new kinds of books, in which parallel columns made possible critical comparisons previously unenvisioned, whether between biblical texts or between national histories. Eusebius went even farther, creating new research tools, new forms of history and polemic, and a new kind of library to support both research and book production. Christianity and the Transformation of the Book combines broad-gauged synthesis and close textual analysis to reconstruct the kinds of books and the ways of organizing scholarly inquiry and collaboration among the Christians of Caesarea, on the coast of Roman Palestine. The book explores the dialectical relationship between intellectual history and the history of the book, even as it expands our understanding of early Christian scholarship. Christianity and the Transformation of the Book attends to the social, religious, intellectual, and institutional contexts within which Origen and Eusebius worked, as well as the details of their scholarly practices--practices that, the authors argue, continued to define major sectors of Christian learning for almost two millennia and are, in many ways, still with us today.,

Anthony Grafton is the author of The Footnote, Defenders of the Text, Forgers and Critics, and Inky Fingers, among other books. The Henry Putnam University Professor of History and the Humanities at Princeton University, he writes regularly for the New York Review of Books. Megan Williams is Assistant Professor of History, San Francisco State University.

"The book succeeds in placing Origen and Eusebius firmly and illuminatingly against a world in which Christianity had not yet triumphed, and they convey vividly the intellectual daring involved in these pioneering attempts to articulate and define Christianity alongside and against the Jewish and the classical worldviews." - Eamon Duffy, New York Review of Books"