Awash in a Sea of Faith 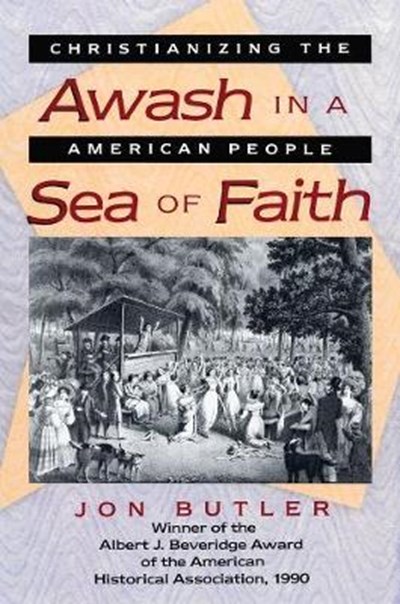 Awash in a Sea of Faith

QTY
Add to Basket
Publisher: Harvard University Press
ISBN: 9780674056015
Number of Pages: 376
Published: 02/03/1992
Width: 15.6 cm
Height: 23.5 cm
Description Author Information Reviews
Challenging the formidable tradition that places early New England Puritanism at the center of the American religious experience, Yale historian Jon Butler offers a new interpretation of three hundred years of religious and cultural development. Butler stresses the instability of religion in Europe where state churches battled dissenters, magic, and astonishingly low church participation. He charts the transfer of these difficulties to America, including the failure of Puritan religious models, and describes the surprising advance of religious commitment there between 1700 and 1865. Through the assertion of authority and coercion, a remarkable sacralization of the prerevolutionary countryside, advancing religious pluralism, the folklorization of magic, and an eclectic, syncretistic emphasis on supernatural interventionism, including miracles, America emerged after 1800 as an extraordinary spiritual hothouse that far eclipsed the Puritan achievement-even as secularism triumphed in Europe. Awash in a Sea of Faith ranges from popular piety to magic, from anxious revolutionary war chaplains to the cool rationalism of James Madison, from divining rods and seer stones to Anglican and Unitarian elites, and from Virginia Anglican occultists and Presbyterians raised from the dead to Jonathan Edwards, Joseph Smith, and Abraham Lincoln. Butler deftly comes to terms with conventional themes such as Puritanism, witchcraft, religion and revolution, revivalism, millenarianism, and Mormonism. His elucidation of Christianity's powerful role in shaping slavery and of a subsequent African spiritual "holocaust," with its ironic result in African Christianization, is an especially fresh and incisive account. Awash in a Sea of Faith reveals the proliferation of American religious expression-not its decline-and stresses the creative tensions between pulpit and pew across three hundred years of social maturation. Striking in its breadth and deeply rooted in primary sources, this seminal book recasts the landscape of American religious and cultural history.

Jon Butler is Howard R. Lamar Emeritus Professor of American Studies, History, and Religious Studies at Yale University and Research Professor of History at the University of Minnesota. His books include the Los Angeles Times bestseller Becoming America and the prizewinning Awash in a Sea of Faith and The Huguenots in America. He is a past president of the Organization of American Historians.

Throughout, the richness of detail, nuance, and illustration is superb and often eye-opening...In all, it is a daring work of synthesis...meticulously researched...This book ranks among the most challenging and far-ranging historical analyses of religion in America to date. -- Leigh Eric Schmidt Journal of Church and State This is one of those rare books that historians await impatiently for years. It is also one of those rare and remarkable books that prove worth the wait. It fulfills extravagantly the promise of those pathbreaking and pugnacious articles that made magic an essential reality of the seventeenth century and the Great Awakening an interpretive fiction of the eighteenth. It is, by far, the best account we have of early American religious life, and the most radiantly original. -- Michael Zuckerman Journal of the Early Republic Anyone who wants to know about religion in America up to the Civil War would do well to read Jon Butler's rich, comprehensive and--it must be said--contentious account. -- David Martin Times Literary Supplement