Theological Tractates. The Consolation of Philosophy 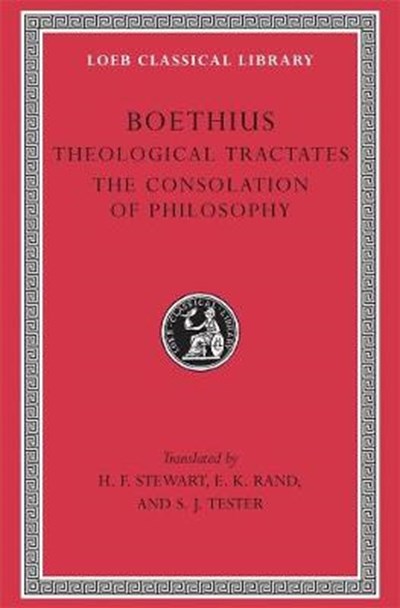 Theological Tractates. The Consolation of Philosophy

QTY
Add to Basket
Publisher: Harvard University Press
ISBN: 9780674990838
Number of Pages: 464
Published: 31/01/1973
Width: 10.8 cm
Height: 16.2 cm
Description Author Information Reviews
Boethius (Boetius)-Anicius Manlius Severinus-Roman statesman and philosopher (ca. 480-524 CE), was son of Flavius Manlius Boetius, after whose death he was looked after by several men, especially Memmius Symmachus. He married Symmachus's daughter, Rusticiana, by whom he had two sons. All three men rose to high honours under Theodoric the Ostrogoth, but Boethius fell from favour, was tried for treason, wrongly condemned, and imprisoned at Ticinum (Pavia), where he wrote his renowned The Consolation of Philosophy. He was put to death in 524, to the great remorse of Theodoric. Boethius was revered as if he were a saint and his bones were removed in 996 to the Church of S. Pietro in Ciel d'Oro, and later to the Cathedral. The tower in Pavia where he was imprisoned is still venerated. Boethius was author of Latin translations of Aristotle, commentaries on various philosophical works, original works on logic, five books on music, and other works. His The Consolation of Philosophy is the last example of purely literary Latin of ancient times-a mingling of alternate dialogue and poems. His Theological Tractates are also included in this volume.

Hugh Fraser Stewart (1863-1948) was Fellow and Dean of St John's College, Cambridge, and Fellow of Eton College. Edward Kennard Rand (1871-1945) was Pope Professor of Latin at Harvard University. S. Jim Tester was Senior Lecturer in Classics at the University of Bristol.