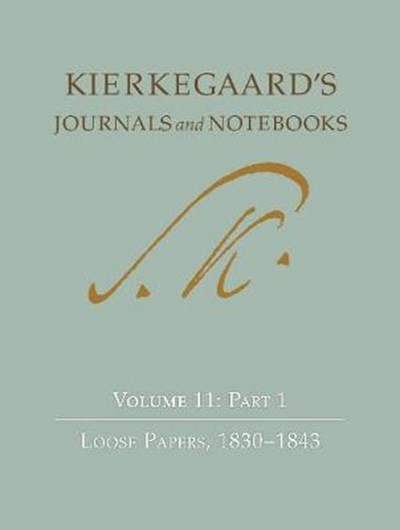 QTY
Add to Basket
Publisher: Princeton University Press
ISBN: 9780691197302
Number of Pages: 784
Published: 05/05/2020
Width: 19.1 cm
Height: 25.1 cm
Description Author Information Reviews
For over a century, the Danish thinker Soren Kierkegaard (1813-55) has been at the center of a number of important discussions, concerning not only philosophy and theology, but also, more recently, fields such as social thought, psychology, and contemporary aesthetics, especially literary theory. Despite his relatively short life, Kierkegaard was an extraordinarily prolific writer, as attested to by the 26-volume Princeton University Press edition of all of his published writings. But Kierkegaard left behind nearly as much unpublished writing, most of which consists of what are called his "journals and notebooks." Kierkegaard has long been recognized as one of history's great journal keepers, but only rather small portions of his journals and notebooks are what we usually understand by the term "diaries." By far the greater part of Kierkegaard's journals and notebooks consists of reflections on a myriad of subjects-philosophical, religious, political, personal. Studying his journals and notebooks takes us into his workshop, where we can see his entire universe of thought. We can witness the genesis of his published works, to be sure-but we can also see whole galaxies of concepts, new insights, and fragments, large and small, of partially (or almost entirely) completed but unpublished works. Kierkegaard's Journals and Notebooks enables us to see the thinker in dialogue with his times and with himself. Kierkegaard wrote his journals in a two-column format, one for his initial entries and the second for the extensive marginal comments that he added later. This edition of the journals reproduces this format, includes several photographs of original manuscript pages, and contains extensive scholarly commentary on the various entries and on the history of the manuscripts being reproduced. Volume 11, Parts 1 and 2, present an exciting, enlightening, and enormously varied treasure trove of papers that were found, carefully sorted and stored by Kierkegaard himself, in his apartment after his death. These papers-many of which have never before been published in English-provide a window into many different aspects of Kierkegaard's life and creativity. Volume 11, Part 2, includes writings from the period between 1843, the year in which he published his breakthrough Either/Or, and late September 1855, a few weeks before his death, when he recorded his final reflections on "Christendom." Among the highlights are Kierkegaard's famous description of the "Great Earthquake" that shaped his life; his early reflections on becoming an author; his important, though never-delivered, lectures on "The Dialectic of Ethical and Ethical-Religious Communication"; and his final, incandescent assault on the tendency-new in his time-to harness Christianity in support of a specific social and political order.