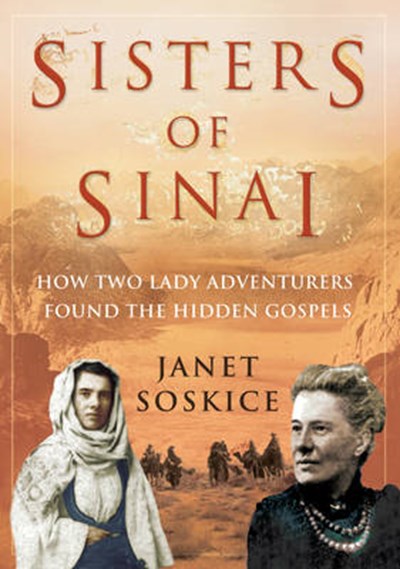 Publisher: Vintage
ISBN: 9780701173418
Published: 26/03/2009
Description Author Information Reviews
"Sisters of Sinai" tells an extraordinary tale of nineteenth century exploration; how two Scottish sisters made one of the most important ancient manuscript finds of the age. Hidden in a cupboard beneath the monastic library at St Catherine's in the Sinai desert the twins discovered what looked like a palimpsest: one text written over another. It was Agnes who recognized the obscured text for what it was - one of the earliest copies of the Gospels written in ancient Syriac. Once they had overcome the stubborn reluctance of Cambridge scholars to authenticate the find and had lead an expedition of quarrelsome academics back to Sinai to copy it, Agnes and Margaret - in middle years and neither with any university qualifications - embarked on a life of demanding scholarship and bold travel. In this enthralling book, Janet Soskice takes the reader on an astonishing journey from the Ayreshire of the sisters' childhood to the lost treasure trove of the Cairo genizah. We trace the footsteps of the intrepid pair as they voyage to Egypt, Sinai and beyond, Murray's guide book in hand coping with camels, unscrupulous dragomen, and unpredictable welcomes. We enter the excitement and mystery of the Gospel origins at a time when Christianity was under attack in Europe. Crucially this is the story of two remarkable women who, as widows, were undeterred in their spirit of adventure and who overcame insuperable odds to become world class scholars with a place in history.

Janet Soskice grew up in Canada and has lived for some years in England where she is Reader in Philosophical Theology at Jesus College, University of Cambridge. As well as lecturing around the world, she writes for The Times and The Times Literary Supplement, and is a frequent contributor to radio and television.

"* 'In Sisters of Sinai Janet Soskice has achieved the impossible - she has brought biblical scholarship to life. A gripping story of two spirited women determined to pursue the truth whatever the cost, with camels to boot. Wonderful.' - Sara Wheeler"