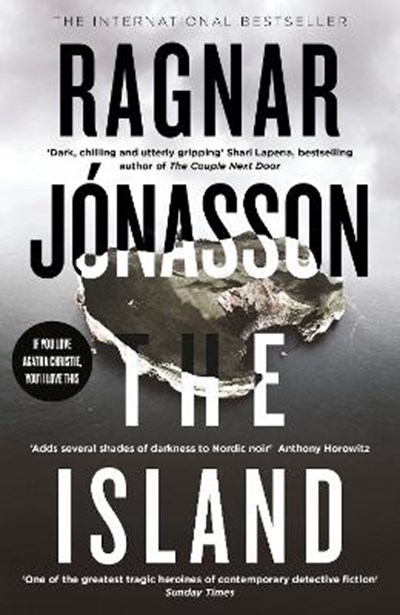 Publisher: Penguin Books Ltd
ISBN: 9780718187255
Number of Pages: 352
Published: 04/04/2019
Width: 15.6 cm
Height: 24 cm
Description Author Information Reviews
THE EXPLOSIVE NEW NOVEL FROM THE INTERNATIONAL BESTSELLING AUTHOR - IF YOU LIKED AND THEN THERE WERE NONE, THE ABC MURDERS, AND NORDIC NOIR, YOU'LL LOVE THIS . . . 'Dark, chilling and utterly gripping, The Island is Nordic noir at its best, and is destined to become a classic of the genre. I couldn't put it down' Shari Lapena, bestselling author of The Couple Next Door _____________ Four friends visit the island. But only three return . . . Detective Inspector Hulda Hermannsdottir is sent to the isolated island of Ellidaey to investigate and soon finds haunting similarities with a previous case - a young woman found murdered ten years ago in the equally desolate Westfjords. Is there a patient killer stalking these barren outposts? As Hulda navigates a sinister game constructed of smoke and mirrors she is convinced that no one is telling the truth, including those closest to her. But who will crack first? And what secrets is the island hiding? Haunting, suspenseful and as chilling as an Icelandic winter, The Island follows one woman's journey to find the truth hidden in the darkest shadows, and shine a light on her own dark past. _____________ 'His best book yet, an unflinching thriller that braids past and present, good and evil, love and loss. I can't wait for Hulda Hermannsdottir's next case' AJ Finn, bestselling author of The Woman in the Window '[Hulda Hermannsdottir is] an excellent addition to the growing band of top-class women detectives' The Times 'Prepare to be swept away to the beautiful yet unforgiving island of Ellidaey in Jonasson's latest Icelandic noir. Atmospheric and creepy, Jonasson successfully keeps you guessing till the bittersweet end' Heat 'A chilling novel about people with dark secrets, protecting themselves without a thought for the consequences' SundayTimes Praise for Ragnar Jonasson: 'The ending really took my breath away and that's hard for writers to do to me these days . . . I should have seen it coming' Ian Rankin 'One of the greatest tragic heroines of contemporary detective fiction' Sunday Times 'Magnificently dark and twisted' C. J. Tudor, bestselling author of The Chalk Man 'Ragnar Jonasson writes with a chilling, poetic beauty - a must-read addition to the growing canon of Iceland Noir' Peter James, bestselling author of Love You Dead 'A distinctive blend of Nordic noir and golden age detective fiction . . . atmospheric and evocative prose' Guardian 'Jonasson's books have breathed new life into Nordic noir . . . all the skilful plotting of an old-fashioned whodunit although it feels bitingly contemporary in setting and tone' Sunday Express

Ragnar Jonasson is an international number one bestselling author who has sold over two million books in thirty-two countries worldwide. He was born in Reykjavik, Iceland, where he also works as an investment banker and teaches copyright law at Reykjavik University. He has previously worked on radio and television, including as a TV news reporter for the Icelandic National Broadcasting Service, and, from the age of seventeen, has translated fourteen of Agatha Christie's novels. His critically acclaimed international bestseller The Darkness is soon to be a major TV series. Victoria Cribb studied and worked in Iceland for many years. She has translated more than 25 novels from the Icelandic and, in 2017, she received the Ordstir honourary translation award for services to Icelandic literature.