In the World, But Not of the World

Christian Social Thinking at the End of the Twentieth Century 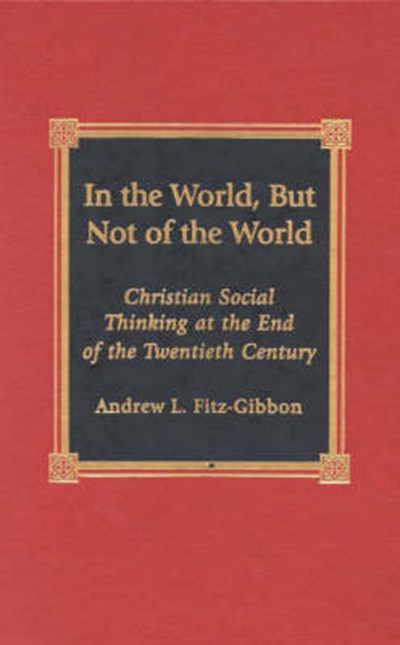 In the World, But Not of the World

Christian Social Thinking at the End of the Twentieth Century

QTY
Add to Basket
Publisher: Lexington Books
ISBN: 9780739101193
Number of Pages: 272
Published: 14/08/2000
Width: 15.5 cm
Height: 23.5 cm
Description Author Information Reviews
In the World, But Not of the World explores the threefold tension among Alasdair MacIntyre's prognosis for Western society; the desires of some for a social transformation with a Christian moral vision at the sacred centre; and a "baptist" understanding of Christianity as essentially voluntary, non-sacralist discipleship. Andrew Fitz-Gibbon uses five contemporary Christian social thinkers, from different traditions, as conversation partners. Through his examination of these thinkers, Fitz-Gibbon explores how the church may continue to truthfully narrate the Christian story in the midst of the moral tensions of late-capitalist Western society. His creative conclusion is that the church at the beginning of the twenty-first century can move toward a resolution of the central tension of "being in the world,but not of the world" through a synthesis of the believers' church tradition and an affirmation of communitarian liberal democracy.

Andrew L. Fitz-Gibbon is an ordained Baptist minister. He is Adjunct Professor at Trinity College and Seminary in Newburgh, Indiana, and has been a guest scholar at the University of Newcastle and a visiting scholar at Cornell University.

No Baptist to my knowledge in the U.K. has explored the civic position and possibilites of gathered churches in the way Fitz-Gibbon has. Theology