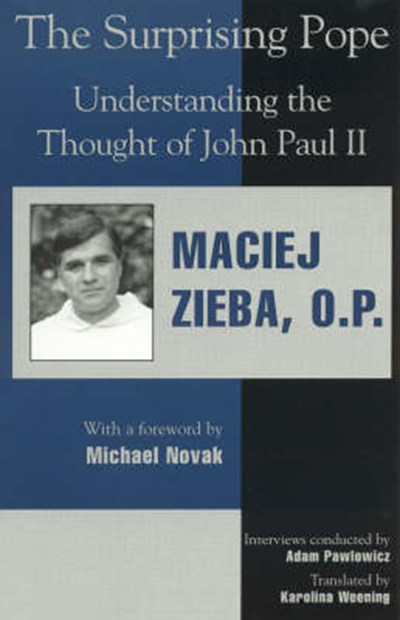 QTY
Add to Basket
Publisher: Lexington Books
ISBN: 9780739101452
Number of Pages: 272
Published: 02/08/2000
Width: 15.6 cm
Height: 23.5 cm
Description Author Information Reviews
On the wave of Pope John Paul II's recent extraordinary journeys to places such as Cuba and Israel comes this new, accessible survey of his teachings from one of his closest associates. Father Maciej Zieba, a Pole who came back to Catholicism after studies in physics and activist efforts with Solidarnosc, was ordained as a Dominican priest. Young, media-savvy, and down-to-earth as well as erudite and profound, Father Zieba has become known in Poland as an engaging interpreter of the Pope's teachings. Published here in English are eleven "conversations"-originally interviews conducted for a series of programs on Polish television-on the most important points of John Paul II's teachings. Journalist Adam Pawlowicz represents the reader in dialogue with Zieba, who not only clarifies these teachings but also confronts contemporary critiques. Tackling such complex issues as freedom, democracy, ecumenicalism, and sexuality with grace and equanimity, The Surprising Pope is a major contribution to our understanding of the papacy of John Paul II.

Maciej Zieba, O.P., is a close associate of John Paul II and regularly represents the Pope to the Polish media. He is the founder of the 'Tertio Millennio' Institut in Krakow. Karolina Weening has translated numerous books and articles in German, Italian, and Polish, and English.

In a marvelously accessible manner, [Zieba] here responds to questions on everything from the Pope's role in the end of communism to his teachings on human sexuality and the nature of democracy...The Surprising Pope is warmly recommended. First Things