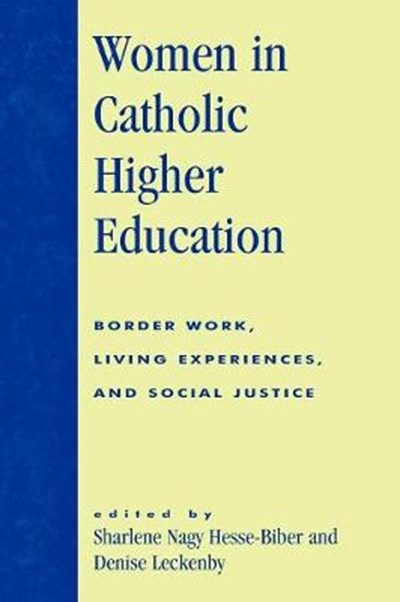 QTY
Add to Basket
Publisher: Lexington Books
ISBN: 9780739105825
Number of Pages: 200
Published: 18/06/2003
Width: 14.8 cm
Height: 22.7 cm
Description Author Information Reviews
Women in Catholic Higher Education: Border Work, Living Experiences, and Social Justice examines the contemporary contradictions and tensions faced by women who teach and work in Catholic institutions of higher learning. Delving into discourse traditionally silenced by the Catholic hierarchy, this edited collection observes the ways in which patriarchal structures often hinder women's advancement within these institutions. The contributors describe their own conflicts and successes in their attempts to negotiate their academic careers and personal lives in the context of the clash between secular and Catholic patriarchal values. In their critical analysis, they extrapolate from their particular experiences and suggest concrete steps toward social justice for women in Catholic higher education. The risk-taking and creative thought inaugurated here by editors Sharlene Hesse-Biber and Denise Leckenby will undoubtedly serve as a model for other scholars fully engaged, both as professionals and as social individuals, in careers and lives on Catholic campuses.

Sharlene Hesse-Biber, Professor of Sociology at Boston College, is the Founder and Director of the National Association of Women in Catholic Higher Education (NAWCHE). Denise Leckenby is a teaching fellow at Boston College and has worked for NAWCHE.

This book deserves a place in the library of any Catholic institution of higher education both as living history and as a rebuke and reminder. American Catholic Studies This is a good book, some of it downright bold. Readers will be challenged, provoked even, into thinking more deeply about issues. Catholic Education: A Journal of Inquiry and Practice