When Sacred and Secular Mix 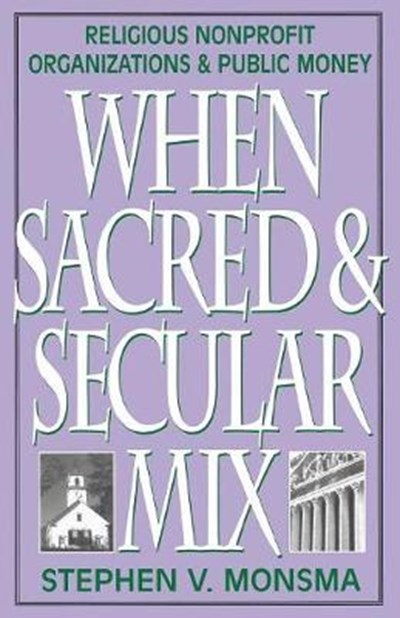 When Sacred and Secular Mix

QTY
Add to Basket
Publisher: Rowman & Littlefield
ISBN: 9780742508187
Published: 01/07/2000
Description Author Information Reviews
Despite Americans' traditional emphasis on the separation of church and state, both in theory and practice, few are aware of the hundreds of millions of public dollars that flow annually to religiously based nonprofit organizations. Based on a massive nation-wide survey of nearly 800 such groups, Stephen V. Monsma's important study explores the implications of this financial partnership.

Stephen V. Monsma is professor of political science and chair of the Social Science Division at Pepperdine University in Malibu, California. He is the author of several books on religion and politics, including Positive Neutrality: Letting Religious Freedom Ring.

This is the book on the next hot subject: plans to draw on faith-based groups for our social reconstruction. It contains evidence, provides analysis-and judgment. One of the best. -- Amitai Etzioni, author of The Spirit of Community and The New Golden Rule Provides useful information, careful analysis, and powerful recommendations on this important problem. -- A James Reichley, author of Religion in American Public Life Stephen Monsma provides powerful historical, legal, constitutional, and practical support for the idea that religious institutions should be more involved in the delivery of needed public services to all Americans. I hope the Supreme Court is reading. -- Michael W. McConnell, William B. Graham Professor of Law, University of Chicago Stephen V. Monsma's well-researched study develops an enhanced conceptual framework for the expanded role of religious-based nonprofits in implementing public policies. -- Rev. Kevin Sullivan, Chief Operating Officer, Catholic Charities of the Archdiocese of New York Those who advocate a high wall separating church and state- wanted to find out about and cut public funding for religious no-profits, they would do well to read Stephen V. Monsma's 'When Sacred and Secular Mix' Philanthropy Highly recommended for academics, lawyers, and political leaders. CHOICE